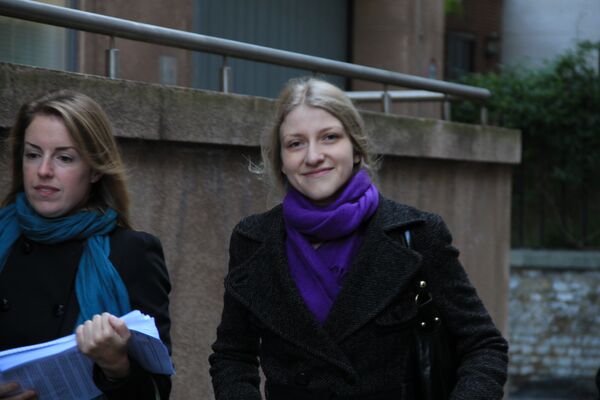 British judges have prevented the naming of senior diplomats who had affairs with suspected Russian spy Yekaterina (Katia) Zatuliveter, the Telegraph daily said on Monday.

British judges have prevented the naming of senior diplomats who had affairs with suspected Russian spy Yekaterina (Katia) Zatuliveter, the Telegraph daily said on Monday.

Zatuliveter, a former parliamentary assistant in the United Kingdom, had a four-year affair with 64-year-old Liberal Democrat MP Mike Hancock. Their relationship was uncovered by British media, but the 26-year-old woman also admitted a string of liaisons including one with a NATO official and another with a Dutch diplomat.

After Hancock, Zatuliveter had an affair with a senior NATO official (56-year-old German, married grandfather), who specialized in security issues covering Russia and Europe.

On Sunday, a newspaper pictured the German diplomat dressed in a banana suit for a Halloween party at his daughter’s home in 2009. However, his face was blotted because of the terms of a court order that the man cannot be identified.

“The German diplomat’s affair appears not to have damaged his career. Since it was uncovered, he has been promoted to another senior post in Germany’s foreign service,” the Telegraph said.

Zatuliveter also admitted having a liaison with a Dutch diplomat, who is now an adviser to a prominent European royal family and whose identity will also not be revealed. According to the Telegraph, the Dutch diplomat worked in St. Petersburg and Moscow “as well as at the seat of government in another leading European nation,” and “advised a top royal”.

Reportedly, the Dutch mistook Zatuliveter for a prostitute and tried to pay her after sex.

The Telegraph made a request to name the two diplomats, but said it was denied by the Special Immigration Appeals Commission headed by Justice John Mitting, who is residing over Zatuliveter’s deportation case.

The names of the two men have been withheld to prevent possible damage to "international relations.”

Zatuliveter was arrested in December and was then ordered to leave the country. In October, she began her appeal against the Home Office deportation order.