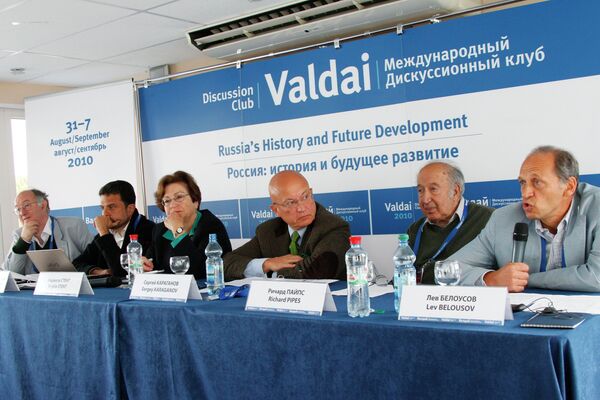 Top Russia experts from around the world gather this week near Moscow to debate the country’s future 20 years after the breakup of the Soviet Union, amid fast-shifting global relations and in light of Vladimir Putin’s expected return to the Kremlin.

Top Russia experts from around the world gather this week near Moscow to debate the country’s future 20 years after the breakup of the Soviet Union, amid fast-shifting global relations and in light of Vladimir Putin’s expected return to the Kremlin.

The annual meeting of the Valdai Discussion Club, an informal group comprising leading economists, historians and other thinkers on Russia from the United States, Europe and Asia, starts Monday in the town of Kaluga 100 miles (160 kilometers) south of Moscow.

The agenda includes discussion on how turmoil in the global economy and international relations will affect Russia and on how domestic developments will influence Moscow’s foreign policy. But it was clear that Putin himself would also be central to the debate.

“I think we should now talk about the Putin generation,” said Thomas Gomart, director of the Russia Center at the French Institute of International Relations and a member of the Valdai group.

The Valdai group offers influential academics and researchers from both outside and inside Russia to discuss topics directly with a range of Russian decision-makers and members were expected to meet with Putin at the end of the week.

The unique gathering also gives Russian policymakers a chance to meet and discuss concepts for the country’s future political and economic development directly with the authors, both foreign and Russian, of those ideas.

The Valdai club was launched in 2004 by the RIA Novosti news agency, the Russian Council on Foreign and Defense Policy think tank, the Russia Profile and Russia in Global Politics magazines and The Moscow News newspaper.

Despite being replaced in the Kremlin in 2008 by his chosen successor, President Dmitry Medvedev, Putin has consistently remained a focus of attention for Valdai participants and will be again this year after announcing plans to run again for president.

Gomart said Putin’s anticipated return to the Kremlin was unlikely to produce any dramatic changes in Russia’s foreign policy course. He cautioned however that despite this predictability, Russian leaders should refrain from “feverish conduct” in domestic policy.

“As a foreign onlooker, I can see the increasingly obvious signs from the Putin system,” he said, referring to lack of upward social mobility for the younger Russians and heavy state control of an economy that “remains profoundly oligarchic” in the distribution of wealth.

Andrew Kuchins, Director of Russia and Eurasia at the Washington, DC-based think tank Center for Strategic International Studies, said that he does not foresee drastic changes in the US-Russia relations after the 2012 presidential election.

“The relationship has been reset. We have now more normal and constructive relationship with Russia, as we should have,” Kuchins said, noting that the US-Russia “reset” announced in 2009 had been agreed between Putin and Medvedev.