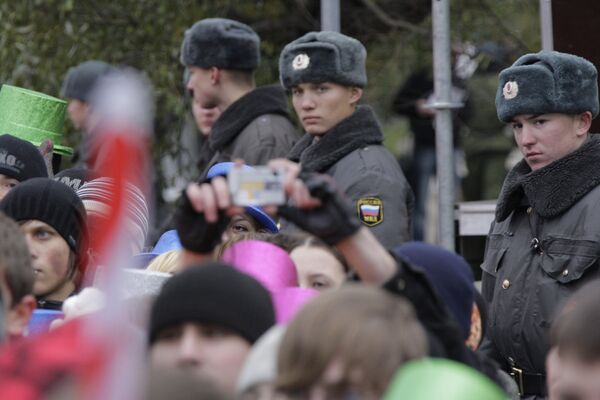 © RIA Novosti . Антон Денисов
/
Go to the photo bank
Subscribe
More than 5,000 policemen will ensure public order and security in the Russian capital on Friday during the celebration of the National Unity Day

More than 5,000 policemen will ensure public order and security in the Russian capital on Friday during the celebration of the National Unity Day, a Moscow police spokesman said.

Russia will mark the holiday with Pro-Kremlin, nationalist and opposition rallies across the country, including 18 authorized public events in Moscow alone.

“An operational center will be set up [in Moscow] to ensure security and public order. More than 5,000 police officers will be on duty in the capital,” the official said.

About 10,000 activists and supporters of Russia’s ruling United Russia party will gather on the Poklonnaya Gora for a meeting and a concert.

The Russian nationalists will mark the holiday with their traditional Russian March in southeast Moscow and hold a rally at the Soldier of the Motherland monument.

Up to 3,000 activists of the Liberal Democratic Party of Russia (LDPR) will gather on Pushkin Square in downtown Moscow to call for the unity of Russia and to protest against corruption in the country.