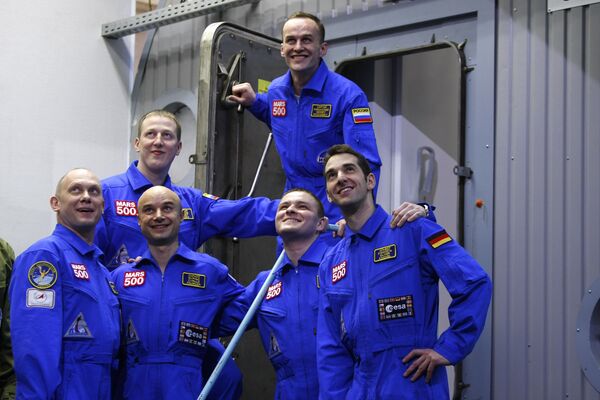 The Mars 500 experiment simulating a manned flight to the Red Planet will give scientists new insights into unique human abilities, supervisor of the project Alexander Suvorov said.

The experiment, which lasted 520 days, ends at 02.00 pm (10:00 GMT) on Friday, when the participants - three Russians, a Chinese, a Frenchman, and an Italian – leave a cramped capsule at the Russian Institute of Biomedical Problems where they have lived and worked to a strict timetable since June 3, 2010.

“The experiment was a success because none of the participants dropped out along the way. They all stayed healthy and…retained their working efficiency throughout the project,” Suvorov said in an exclusive interview wiith RIA Novosti.

With only limited contact with the outside world and no access to natural light, the men have been undergoing regular medical and psychological checks to see just how well they were doing.

“We are certain now that people could make a return trip to Mars without any problems,” the scientist said. “However, an ideal number of crewmembers during a real flight should be four rather than six due to a limited amount of resources, including food supplies, which may be taken aboard.”

Suvorov said the experiment had already brought several unexpected insights into how a human body reacts to stress and prolonged confinement.

“In some tests the participants registered the decrease in metabolic rates, which means that the amount of food supplies taken on a trip [to Mars] could be reduced,” he said.

Other “surprises” included reduced motor performance and increased levels of sleep disorder among the crewmembers.

Suvorov said that despite the success of the experiment, it is too early to consider a real manned flight to Mars in the near future.

“First, we have to develop effective protection from strong radiation, which the crew will face during the trip,” he said.