Russian aid to eurozone to be decided soon - Medvedev 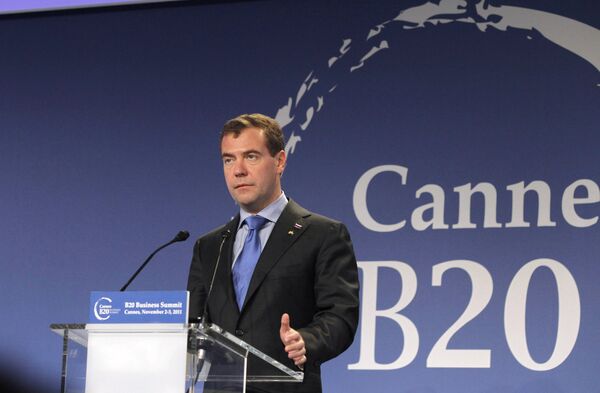 © RIA Novosti . Dmitry Astakhov
/
Go to the photo bank
Subscribe
Russia's financial aid to the eurozone countries may be defined in the next few hours, Russian President Dmitry Medvedev said on Thursday.

Russia's financial aid to the eurozone countries may be defined in the next few hours, Russian President Dmitry Medvedev said on Thursday.

He said it was too early to speak about precise sums and figures.

"In the next few hours our sherpas and finance ministers will make all the necessary adjustments, and we will prepare the final scheme," Medvedev told journalists, adding that "everything will be done tomorrow."

The Russian president said Thursday's summit focused mainly on the situation in Eurozone and "the extravagant stance" of Greece concerning the future referendum.

"But I still hope that the leadership of Greece - the incumbent or coalition government - will have enough determination to bring the current policy to an end and receive funds to overcome the Greek economy's crisis," Medvedev said. "Because eurozone stability and future events on the European continent, maybe even a new wave of financial crisis, depend on it."

He said he discussed financial aid to Greece with other leaders of the BRICS group of nations, comprising Brazil, Russia, India, China and South Africa.

He said the leaders agreed to help preserve "one of the key reserve currencies," but the aid should be done "consciously and with full understanding of existing risks."

"This aid should be targeted, understandable, transparent," Medvedev said. "And we should clearly understand on what conditions it would be provided."

Medvedev also said that Russia may apply to host the G20 summit in 2013.