Medvedev to head for G20 summit 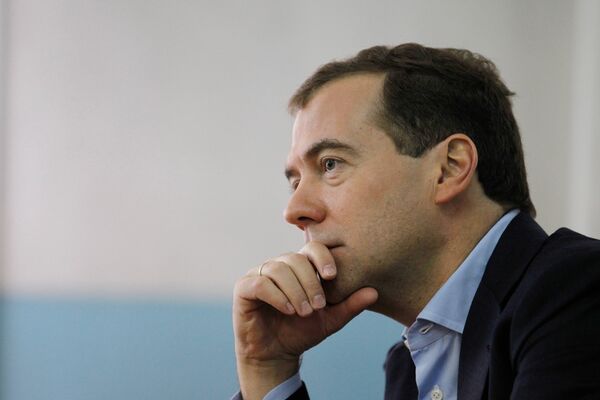 © RIA Novosti . Dmitriy Astakhov
/
Go to the photo bank
Subscribe
Russian President Dmitry Medvedev will arrive in the French city of Cannes on Wednesday evening to attend the G20 summit that will focus on financial and energy issues on November 3-4.

Russian President Dmitry Medvedev will arrive in the French city of Cannes on Wednesday evening to attend the G20 summit that will focus on financial and energy issues on November 3-4.

Medvedev will hold a few bilateral meetings with his counterparts, including the Chinese and Brazilian presidents, Hu Jintao and Dilma Rousseff, on the sidelines of the summit on Thursday, presidential aide Sergei Prikhodko said.

He said the Russian leader hopes to meet with other leaders of the BRICS countries (Brazil, India, China and South Africa) on the same day to discuss economic issues, including problems facing the eurozone, the International Monetary Fund reform, reserve accumulation mechanisms.

Medvedev is also expected to discuss with them the completion of the Doha Round of World Trade Organization (WTO) trade talks, as well as climate change.

He said Russia will insist on reducing budget deficits in all countries, and will confirm its position on the necessity to reform the International Monetary Fund.

During a meeting with his Chinese counterpart, the third in the past year, Medvedev plans to discuss the broadening of Russian-Chinese relations, including trade ties and humanitarian cooperation, Prikhodko said. Russian-Chinese trade turnover is likely to reach a record of $70 billion by the end of the year, he added.

The two leaders will also exchange their opinions on the global economic and financial situation. Developments in Central Asia, Africa and the Middle East, as well as the North Korean nuclear issue, may also be discussed, the presidential aide said.

Year 2011 marks the 10th anniversary since the signing of the Russian-Chinese Treaty of Friendship.

Cooperation within the G20, as well as in the investment, space, aircraft construction and energy spheres will be in the focus of Medvedev’s talks with his Brazilian counterpart, the second in the past year, Prikhodko said.

The two leaders may also touch upon military and technical cooperation between Russia and Brazil - Moscow’s “reliable strategic partner in the G20, United Nations Security Council and BRICS” - during their meeting, he added.

Brazil is Russia’s key Latin American trade partner. Bilateral trade reached $4.8 billion in the first eight months of 2011, a 23-percent increase year-on-year, and is likely to reach its historic maximum of $7 billion in 2011.