New Kyrgyz president calls for closure of U.S. air base 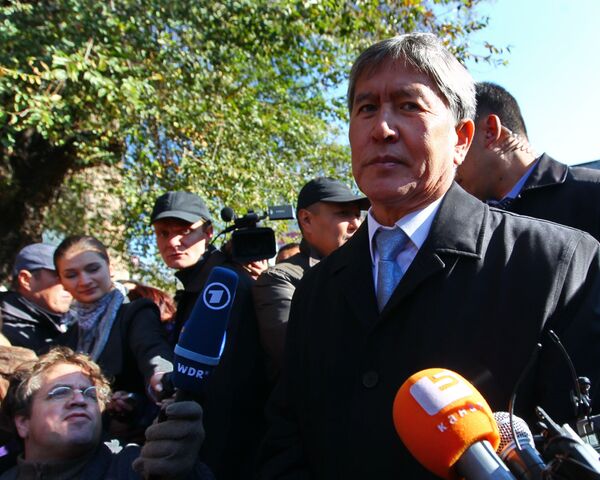 © RIA Novosti . Andrei Stenin
/
Go to the photo bank
Subscribe
Kyrgyzstan’s President-elect Almazbek Atambayev has called for the closure of the United States’ airbase at Manas in the central Asian republic.

“I don’t think the base at Manas guarantees the security of our country. I would not want to see another country carry out a retaliatory strike against the base. A civil airport is a civil object, and it should remain so,” he said.

Kyrgyzstan “would observe all international agreements,” he stressed, but when the current Manas base agreement expires in 2014, the American facility there should go.

Kyrgyzstan could set up a transport hub for Afghanistan for “passage of civilian traffic, maybe together with Russia,” Atambayev said.

“There is no political game here. It’s not really very good to arrive at the country’s main airport and see military equipment there,” he said at his first press conference after preliminary presidential election results were announced on Sunday.

With 99.96 percent of the ballots counted on Sunday, Atambayev won the election with 63.24 percent of the vote. His nearest rival was the leader of the United Kyrgyzstan party Adakhan Madumarov, with 14.76 percent.

The Manas base was set up near the Kyrgyz capital Bishkek in 2001 in the aftermath of the 9/11 attacks in America to support military operations against the Taliban in Afghanistan. The facility remains key to supply operations for the ongoing military campaign there.

Kyrgyz Prime Minister Omurbek Babanov has said previously that the future of the base as a transit point for U.S. military cargo should be decided by the Collective Security Treaty Organization, a grouping of Central Asian states including several former Soviet Republics.