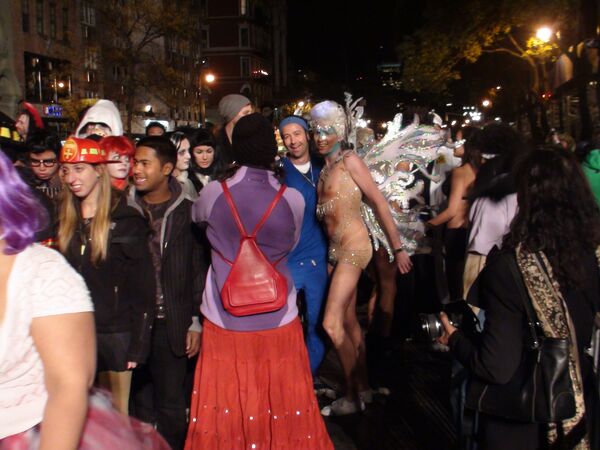 What is the point of Halloween? Why is today a day to give away candy to children dressed as skeletons or robots or Michael Jackson? Why is excess even among adults somehow expected tonight?

What is the point of Halloween? Why is today a day to give away candy to children dressed as skeletons or robots or Michael Jackson? Why is excess even among adults somehow expected tonight?

Just as many early Christian churches were built over pagan temples, so the Christian calendar largely incorporated the pagan one. Thus, Yuletide (or Roman Saturnalia), around the time of the winter solstice, became Christmas, and the pagan holiday Ostern, the rites of spring upon the  vernal equinox, became Easter, while the February Lupercal Feast (traditional time of marriages) was renamed St. Valentine’s Day.

Tomorrow, November 1st, is one of the holiest days in the Catholic calendar - All Saints Day. Before Christianity, it was the ancient pagan festival of Samhain. The Celts actually considered Samhain, and not Yuletide. the holiest day in the year. Samhain to them marked the opening of the celestial doorway between darkness and light, and the dissolving of a mystical boundary between worlds. The commencement of the holiday, in the ancient tradition, was actually not in the morning, but on the night before (the evening before "All Hallows Day" being "Hallowe'en" - in whose whose much-profaned and now hardly recognizable commercialized relic what is left of the original spirit of Samhain now survives).

To the Celts, Samhain was meant as a celebration not just of the autumn harvest, but of the transcendence of the soul.  It was believed that on Samhain “the doorway between worlds” was open—and that on Samhain the living and the dead could communicate. Thus the scary costumes - an attempt to scare or confuse the evil spirits, and the sweets - an attempt to placate them. Our pumpkins carved as skulls, with candles in them...these are modern-day gargoyles, though we do not think about it.

Even now, in the Catholic tradition, on All Saints Day, flowers and candles and cakes are offered at the graves of those we have loved and lost. The childish practice of "trick or treating" comes from the medieval English and Scottish practice of "souling" on the evening before "Hallowmas".

Also, on All Saints’ Day in Spain, at least or the last nearly 200 years, it has been the somewhat eccentric tradition for theatres to stage readings of Jose Zorilla’s Don Juan Tenorio, a Romantic revision of Tirso de Molina’s far better known tragedy El Burlador de Sevilla. If you can imagine a Don Juan who is not incorrigible (well, actually Pushkin could, and that deserves far more than a parenthesis, but I digress), Zorilla’s hero, of all people, is tamed at last by true love, and finally settles down, and marries Dona Ana, to whom he becomes a true, good, doting husband… And so life conquers death and love conquers all. Viva España!

On that note, pause a moment amidst this day's mad sugar rush (and tomorrow's letdown) to celebrate the birthday on this day, October 31, 1795, of the finest poets ever to write in the English language: John Keats, a man whose verse was certainly poised at the gateway between life and death.  Here is my favorite poem of his, at once a realization of oncoming early death and a celebration of art, poetry, music, and life itself:

"On leaving some friends at an early hour."

Give me a golden pen, and let me lean
On heap'd-up flowers, in regions clear, and far; Bring me a tablet whiter than a star, Or hand of hymning angel, when 'tis seen The silver strings of heavenly harp atween:
And let there glide by many a pearly car, Pink robes, and wavy hair, and diamond jar, And half-discover'd wings, and glances keen.
The while let music wander round my ears, And as it reaches each delicious ending, Let me write down a line of glorious tone, And full of many wonders of the spheres:
For what a height my spirit is contending!
'Tis not content so soon to be alone.