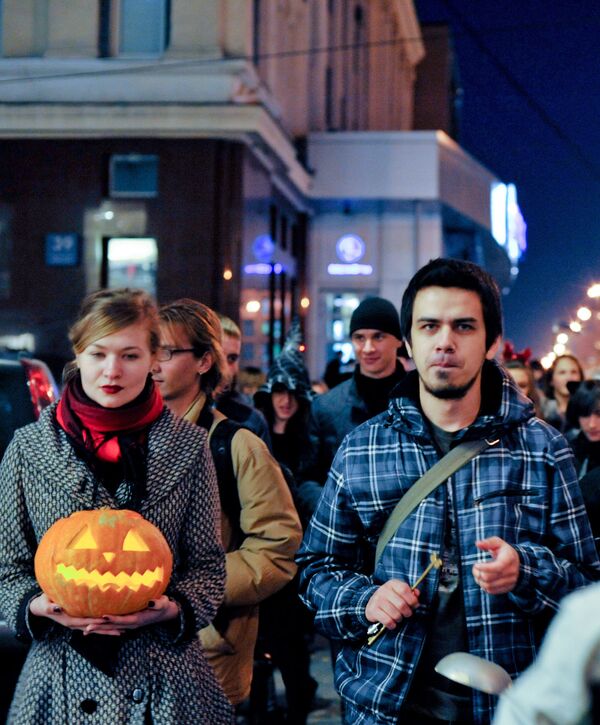 As Western youths flock to Halloween parties dressed as ghosts, zombies and witches, opinion polls show most Russians will ignore the event, with only a few people planning to celebrate a holiday many Russian officials and religious authorities claim is “Satanic."

As Western youths flock to Halloween parties dressed as ghosts, zombies and witches, opinion polls show most Russians will ignore the event, with only a few people planning to celebrate a holiday many Russian officials and religious authorities claim is “Satanic."

Sixty-seven percent of Russians said they had no plans to mark one of the world's oldest – and most commercialized – holidays, according to a poll conducted by Russia’s Levada Center in late October.

Just 6 percent of Russians plan to attend Halloween parties on the night of October 31, amid growing concerns the psychological and social impact of the Celtic holiday is “destructive.” The low expected participation rate comes despite increasing Russian awareness of the holiday, which grew from 54 percent to 73 percent in the past five years.

Education officials and religious figures have fuelled fears about the Halloween celebrations, which date to Pagan times. Back in 2003, the Education Department of the city of Moscow recommended that primary and secondary school teachers ban Halloween at schools.

According to a recommendation issued by the department, the holiday stems from “rituals of Satanically oriented religious sects” and promotes “the cult of death.” Quoting psychologists, the document’s author concludes that Halloween celebrations “mystify and satanize a child’s mind,” leading to the “moral corruption of children.”

Halloween, which once marked the end of summer and the harvest and the beginning of winter, gained popularity in Russia after the Soviet collapse, with the first Halloween parties held in Russian schools in the late 1990s, said Konstantin Ushakov, the editor-in-chief of the magazine School Headmaster.

“Before that time, we did not know anything about the holiday,” he said, adding that Halloween celebrations in Russia “were not prompted by any social or political reasons – people just wanted to have one more holiday.”

Following a global trend, the popularity of Haloween, which has long lost its religious meaning and is viewed by youths as an opportunity for fun rather than a Satanic party, has increased in big Russian cities since the fall of the Iron Curtain, but the Russian provinces remain largely untouched by Halloween fever.

“Banning Halloween?! It’s a witch-hunt and bigotry!” said a 26-year-old Muscovite, who identified herself as Yekaterina. She recalled her school Halloween parties as joyful events that had nothing to do with “Satanism.”

“Each group of students prepared some attractions for the party – a Panic Room, a fortune telling session, or a Haloween Pumpkins contest for example. We sang English songs and organized performances for our parents,” she said.

"I've always enjoyed Halloween," said Julia Planova, a Russian-born student from Ottawa. She said, however, that she understood why some people do not want children to celebrate the holiday.

“But ‘Satanism’ is all around," she added. "Take various films about vampires for example... Banning Halloween alone would not change anything."

Besides the psychological threats allegedly posed by Halloween, opponents say the holiday should be banned from schools because under the Constitution, Russia is a secular state.

In July, the Education Department in Russia’s northern Republic of Karelia addressed a letter to local education authorities and school headmasters recommending that Halloween parties that “include religious elements” and therefore violate the “secular character of education” in Russia, be cancelled at schools throughout Karelia.

Instead, “new forms of school holidays based on Russian cultural values” should be promoted among children, the document reads.

Ushakov dismissed the argument that Halloween’s “religious” nature makes it unsuitable for schools.

“I believe that this argument is not relevant anymore, because the pressure of non-secular education [at schools] is quite strong,” he said.

A few years ago, the Russian authorities moved to introduce optional religious education at secondary schools, which is due to include a course on Russia's four largest religions, as well as on secular ethics. A subject called the Basics of Orthodox Culture has already been launched in some Russian regions as part of an experiment by the Russian Education Ministry.

The move, which was supported by more than two thirds of Russians, according to a 2009 poll by Levada Center, as well the Russian Orthodox Church and leaders of some other religions, sparked heated public debates. Many public figures, rights activists and other religious leaders have warned that the initiative would lead to discrimination and social divisions.

As for Halloween, Ushakov said he believed its celebration at schools was “quite normal.”

“There are many holidays that have pagan roots and I don’t see the need to link the holiday to any deep ideology,” he said. “If they want to celebrate – let them.”

Halloween is not the only holiday considered “improper” by Russian conservatives. The increasing popularity of St. Valentine's Day among Russian youths has also alarmed some high-ranking officials and religious authorities, who have warned of the holiday’s “negative influence” on the youngsters’ “spiritual security” and their “moral values.”

In 2008, Russia introduced an alternative to St. Valentine's, the Day of Family, Love and Faithfulness. The holiday, also known as the Day of Sts. Peter and Fevronia, the Orthodox patrons of marriage, is marked on July 8 with a daisy being its symbol instead of a red heart. Russia’s first lady Svetlana Medvedev is among the new holiday’s most active promoters.