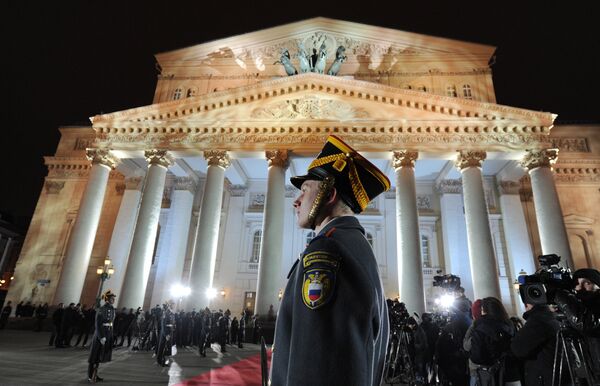 Russian President Dmitry Medvedev has dismissed as “nonsense” allegations about excessive prices of tickets to the newly reopened Bolshoi Theatre in his Facebook comments.

Russian President Dmitry Medvedev has dismissed as “nonsense” allegations about excessive prices of tickets to the newly reopened Bolshoi Theatre in his Facebook comments.

The Bolshoi Theater in Moscow reopened on Friday after six years of reconstruction with a gala concert attended by the president and members of the Russian and international beau monde.

Despite assurances from the theater administration that seats to the first night show were available by invitation only, some online brokers still offered tickets to Friday’s performance, with prices ranging from 1 million rubles ($33,600) to 2.5 million rubles ($84,100).

The cost of the tickets, which some brokers later said was due to a technical glitch, sparked angry reaction from Russian internet users, who accused the government of discrimination and money laundering, prompting Medvedev to respond to the critisism.

“Tickets to the Bolshoi [Theater] will not cost 2.5 million rubles,” the president wrote in his Facebook comments on Saturday.

The Bolshoi Theater is “our all-Russian heritage,” not just a “Moscow theatre,” as described by some users, he wrote.

Built in 1825, the Bolshoi Theater closed for reconstruction in 2005 and was initially scheduled to reopen in 2008, but the project has been marred by repeated delays as well as a misappropriation scandal.

The restoration cost the Russian government a total of 21 billion rubles ($681 million).