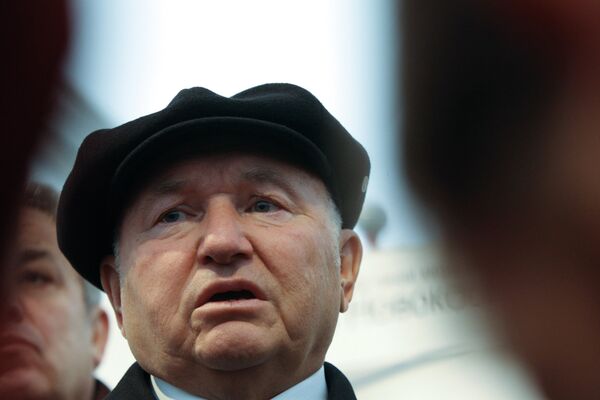 The former long-time mayor of Moscow, Yury Luzhkov, says he will sue a top Kremlin official over accusations of presiding over “rampant corruption.”

The former long-time mayor of Moscow, Yury Luzhkov, says he will sue a top Kremlin official over accusations of presiding over “rampant corruption.”

Kremlin chief of staff Sergei Naryshkin said “inefficient city management” was not the only reason behind Luzhkov’s dismissal by President Dmitry Medvedev last September. There was also an “appalling level” of bribery and corruption “fostered by Luzhkov and his aides,” Naryshkin told journalists on Wednesday.

“Responding to this claim, which appeared more than a year after my resignation, I am filing a lawsuit for defamation,” Luzhkov told the Izvestia newspaper on Thursday.

Luzhkov said “not a single Moscow government official” was prosecuted for corruption during his 18-year rule as Moscow mayor.

“We live in a sick state where the law enforcement system is itself mired in corruption and where an objective judicial system is absent,” the 75-year-old Luzhkov said.

On Monday, state prosecutors summoned Luzhkov for questioning over a corruption inquiry into Bank of Moscow, Russia’s fifth largest bank, which the ex-mayor used to fund property projects.

The inquiry relates to a deal under which Bank of Moscow lent 12.76 billion rubles ($413.3 million) to an obscure real estate firm. The firm used the money to buy land for a construction company owned by Luzhkov’s wife, Yelena Baturina, at prices investigators said were inflated.

Luzhkov said the summons was an attempt to bully him after he criticized Russia’s ruling duo of Medvedev and Prime Minister Vladimir Putin in a Radio Liberty interview last week.

“This is our presidential power… It decided to show who the boss is,” Luzhkov told Izvestia.

Baturina, who is believed to be Russia’s richest woman, denounced Naryshkin’s allegations as a “PR move” and said she would help her husband file a defamation suit.

“He must either prove it or resign and apologize, which I don’t expect either from Naryshkin, or anyone else from them [to do],” she told the Dozhd TV channel.

A spokeswoman for the Russian president, Natalya Timakova, dismissed reports that the ex-mayor’s questioning was politically motivated as “laughable.”

“Too much honor for a retired politician,” she said. “A serious crime is being investigated and various people are being interviewed. As far as I know, Yuri Mikhailovich [Luzhkov] was summoned as a witness.”

Luzhkov has been accused of using his post to help Baturina amass her fortune, estimated to be some $1.1 billion, a claim he denies.