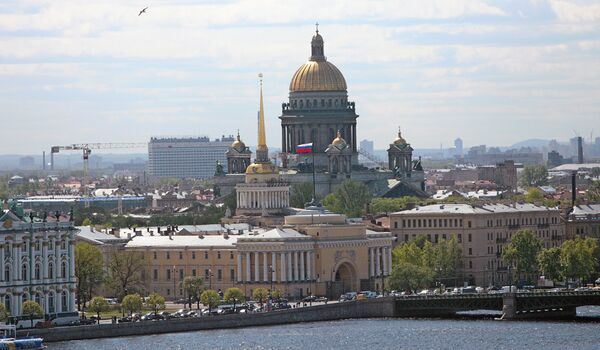 © RIA Novosti . Alexey Danitchev
/
Go to the photo bank
Subscribe
The city of St. Petersburg is capable of holding the 2024 Summer Olympics, and the idea has significant support in the government, Deputy Prime Minister Dmitry Kozak said Thursday.

The city of St. Petersburg is capable of holding the 2024 Summer Olympics, and the idea has significant support in the government, Deputy Prime Minister Dmitry Kozak said Thursday.

Kozak is responsible for delivering the 2014 Winter Games in the southern Black Sea resort city of Sochi, and said the northern capital would play worthy host to the world’s biggest sporting event.

“In principle, this ambition has support,” Kozak said, adding authorities would wait to see how the economy might play out before making any decisions. “The city of St. Petersburg is up to the task of holding the Summer Games of 2024.”

After Sochi was granted the hosting rights to the Winter Games at an International Olympic Committee session in 2007, officials in St. Petersburg including then-governor Valentina Matvienko raised the possibility of brining the sister competition to the city.

That came after several bids by local officials failed to get off the ground.

Russia has held the Summer Games before, in Moscow in 1980.

The country is on a drive to attract the world’s top sporting competitions in an apparent push led by Prime Minister Vladimir Putin to boost its image abroad.

Billions of dollars are being spent sprucing up the country’s dilapidated Soviet-era infrastructure to cope with the demands of holding top class events and catering for massive tourist influxes.

At least $30 billion worth of investment has gone into transforming Sochi and its mountains into a world class winter sports destination, while Putin has promised at least $10 billion for the 13 stadiums and associated upgrades of the 2018 football World Cup.

Russia is also the venue for the 2013 University Games, Formula 1 motor racing starting in 2014, and the 2016 World Hockey Championships.