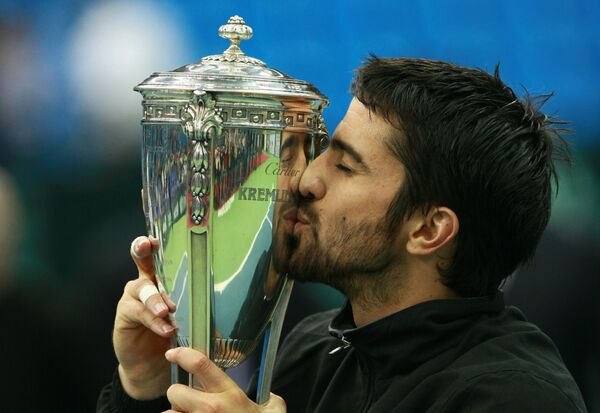 Serbian top seed Janko Tipsarevic won the Kremlin Cup on Sunday, while the women’s title went to Czech eighth seed Dominika Cibulkova.
Tipsarevic, who lost the 2009 final to Russia’s Mikhail Youzhny, went one better on Sunday, beating compatriot and No. 2 seed Viktor Troicki 6-4, 6-2 in a one-sided encounter for his second ATP title of the year.

Cibulkova was made to sweat for her first career title, however, fighting back from a set down to edge Estonia’s Kaia Kanepi 3-6, 6-7, 7-5 in a contest that approached the three-hour mark.
The men’s final was a match between two best friends, Tipsarevic said, even to the point where the competitors felt bad going for winners.
“Psychologically it was really tough,” said the world No. 14. “Especially at the start of the match; we didn’t even go for shots, we just hit the ball back and forth across the net,” said Tipsarevic, who triumphed in Kuala Lumpur earlier this month.

Troicki, who beat Tipsarevic in their only other tour match and lifted the Kremlin Cup last year, put the loss down to “Janko’s stunning game.”
“Today he was stronger and won deservedly.  In the second set, I just couldn’t fight psychologically.”
Cibulkova, the world No 23, was on the brink of losing a fourth career WTA final before turning it around in the second set tiebreak and battling back for victory.

“In the first set I defended more, playing to my opponent’s strengths,” said Cibulkova. “But in the second, I told myself I have nothing to lose, and started to play more aggressively.”
Kanepi is ranked 43 and took her first WTA crown in Palermo last year.
“I’m disappointed, but I’ll try to stay positive and look forward with hope,” the Estonian said before quipping that some retail therapy will help take the edge off the defeat.