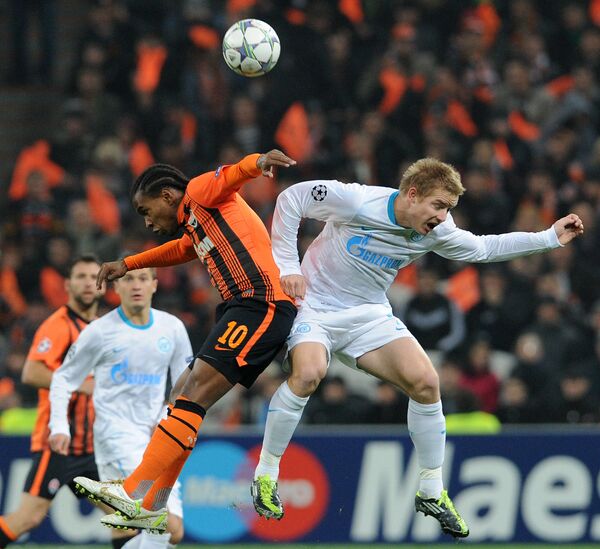 © RIA Novosti . Alexey Filippov
/
Go to the photo bank
Subscribe
A cool chip from Viktor Faizulin secured a point for Zenit St. Petersburg in a pulsating 2-2 draw against Shakhtar Donetsk in the Champions League on Wednesday.

A cool chip from Viktor Faizulin secured a point for Zenit St. Petersburg in a pulsating 2-2 draw against Shakhtar Donetsk in the Champions League on Wednesday.

A ferocious display of attacking football from both sides produced countless chances in one of the most open and flowing games the Champions League has seen.

The result leaves Zenit in joint second in Group G on four points after an opening match defeat to surprise Cypriot group leaders APOEL 2-1 and a home victory over Porto with the same scoreline. Shakhtar remain bottom of the group with two points following a 2-1 defeat in Porto and a 1-1 home draw against APOEL.

Brazilian forward Willian opened the scoring against the run of play inside 15 minutes, sidestepping Igor Denisov on the edge of the box and curling a spectacular shot into the top left corner. Zenit goalkeeper Vyacheslav Malafeev got a hand to it but could only push the ball onto the woodwork and in.

Zenit's Roman Shirokov equalized on 33 minutes to give the visitors just reward for their early dominance, running from deep onto a sliced through ball from Aleksandr Bukharov, flying past goalkeeper Olexandr Rybka and slotting in from a tight angle.

On the stroke of half time, Luiz Adriano span Zenit defender Nicolas Lombaerts in the box and slammed the ball into the corner to give the Shakhtar the lead.

Fayzulin leveled at 2-2 on the hour mark with a lob over Rybka after the Russian stole the ball from defender Olexandr Chyzhov, who slipped.

Shirokov had missed a penalty for Zenit in the 10th minute after Dmytro Chygrynskiy blocked Fayzulin's run into the box. Rybka, the hero of the night for the hosts, dived to his left to palm the low effort away.

Zenit missed at least five one-on-one chances in the first half as Shakhtar failed to track the runs from deep of midfielders Danny and Fayzulin.

Shakhtar's Douglas Costa fired a warning shot around the Zenit wall and over to signal the hosts’ intent early on, but Shirokov immediately went one better for the visitors and forced a save from Rybka.

After Zenit conceded the opener, Shirokov squared a pass for Danny to shoot unimpeded from the edge of the area, but Rybka again was equal to it. Danny went clear moments later but had his left-foot drive saved.

Fayzulin then got on the end of a cross from the left by Danny but could only hit the outside of the post from a tight angle.

The blistering pace relented toward the end of the half, though the chances kept coming.

Zenit's Italian left back Domenico Criscito hurled himself at the feet of Luiz Adriano to block a clear strike at goal before Rybka held onto to a rasping long-range free kick from Zenit's Portuguese centerback Bruno Alves.

The visitors conceded the second right before the half-time whistle.

Shakhtar created three decent chances at the restart, with Lombaerts blocking Luiz Adriano -- and Jadson firing over and then wide after excellent buildup play by Douglas Costa.

At the other end Bukharov struck a shot over and then combined effectively with Shirokov but cannoned a shot straight at a defender. Shirokov then befuddled two defenders with a backheel to release Criscito down the left, but Danny blasted over from the cross.

After Faizulin's leveller, both teams seemed to abandon any thoughts of sitting back and defending as the ferocious pace resumed.

Bukharov went clear and passed inside to Danny, who switched the ball from his right to his left before shooting at the onrushing Rybka.

The Portuguese playmaker skipped past three Shakhtar players on 70 minutes and raced to the byline, but his toe-poked cross bisected the two Zenit players in the area and the danger was cleared.

Fernandinho ended a 10-minute dry spell for the hosts with a shot from just inside the box in the 80th minute, but the save was routine for Malafeev.

The hosts who were hanging on toward the end as substitute Olexandr Kucher cleared a close-range Shirokov effort off the line.

Shaktar answered with some pressing of their own at the death, but it was Zenit who were left ruing their lack of incisiveness in a game they might have won.