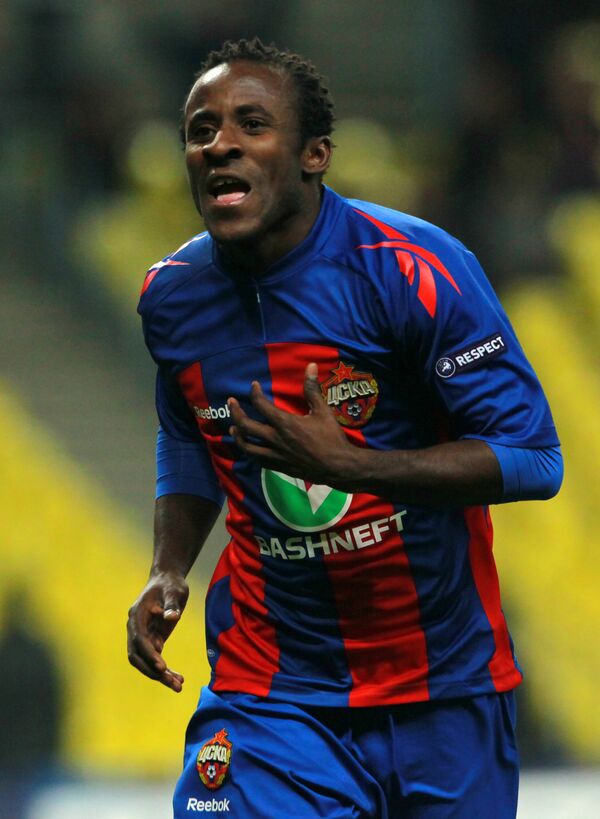 Two goals from Seydou Doumbia and one from Aleksandrs Cauna gave CSKA Moscow a 3-0 victory over Trabzonspor in the Champions League Tuesday; the Russians’ first win of the campaign lifting them off the bottom of Group B.

Two goals from Seydou Doumbia and one from Aleksandrs Cauna gave CSKA Moscow a 3-0 victory over Trabzonspor in the Champions League Tuesday; the Russians’ first win of the campaign lifting them off the bottom of Group B.

CSKA’s top scorer Doumbia struck on 29 minutes, the Ivorian latching onto a cheeky backheel from strike partner Vagner Love and smashing the ball past Tolga Zengin in the Trabzonspor goal.

Subsitute Cauna doubled the lead in the 77th minute, the Latvian connecting with a cross from Vagner Love to finish a flowing move started by Alan Dzagoev.

Doumbia sealed the result with deadly effectiveness four minutes from time, turning defender Giray Kacar with ease and flicking over the onrushing Zengin.

The result kickstarts CSKA’s Champions League campaign after a 2-2 draw in Lille and a 3-2 home defeat to Inter Milan. It is the Turks’ first defeat after a shock 1-0 win in Milan and a 1-1 draw at home to Lille, who host Inter later Tuesday.

"We knew it would be tough, and that's how it turned out," CSKA coach Leonid Slutsky said. "We played well on the counterattack and managed to create lots of chances."

Despite the result, CSKA were narrowly outplayed in the first half by their more industrious visitors, though Trabzonspor had no answer for CSKA’s prolific strike duo.

Centerback Kacar sent an eighth-minute header wide as the visitors had the best of the early exchanges.

Adrian Mierzejewski volleyed just wide before diminutive Brazilian Alanzinho went through on goal and collided with CSKA goalkeeper Vladimir Gabulov. The ball rebounded to striker Halil Altintop, who struck straight at defender Sergei Ignashevich with the goal at his mercy.

Right before Doumbia’s opener, Trabzonspor had the ball in the net as Mierzejewski expertly blasted into the corner, but it was struck off for offside.

Trabzonspor kept attacking, however, showing more tenacity in midfield. They chased down apparent lost causes to force a corner on 35 minutes from which Serkan Balci went close with a header.

Balci struck wide from a promising position a few minutes later as the CSKA tried to play out the half with the lead intact.

The hosts seized the initiative in the second half, however, immediately carving out two excellent chances. Zoran Tosic skied a cross from the right and Doumbia was just beaten to the ball by Zengin after Dzagoev played him clean through.

Yevgeny Aldonin then drove a swerving shot inches wide before Doumbia bundled through the defense but lost control of the ball.

The visitors wouldn’t be muzzled, however, and continued to attack. Mierzejewski fired a vicious shot just wide from a tight angle on the left, and defender Marek Chec floated a lob just over after a corner that caught the CSKA defense half asleep.

But the visitors were left visibly deflated by the second goal after all their efforts, and CSKA found less resistance in midfield, able to attack with greater freedom.

Cauna, confidence high after scoring the second, hit the post with a late strike and Aldonin shanked wide from the follow-up.