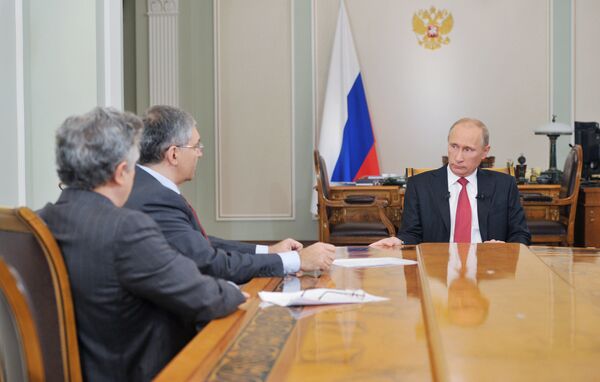 Too much openness may be harmful for the Russian economy, Russian Prime Minister Vladimir Putin said on Monday.

Too much openness may be harmful for the Russian economy, Russian Prime Minister Vladimir Putin said on Monday.

"As far as open economy is concerned, we will of course aspire to it. However, there are concerns, especially about the possibility of Russia joining the WTO [World Trade Organizaiaion], that this excessive openness may even be harmful to us," Putin said in an interview with three Russian federal channels.

The issue of open economy was raised by NTV Director General Vladimir Kulistikov, who said that an anti-crisis program of any government should be "short as a woman's skirt and demonstrate appealing prospects."

"Speaking about a woman's skirt - it's good for some, while others should consider a different garment," Putin said

"We have embarked on WTO negotiation process and, I think, we have insured ourselves against possible surprises. We, in fact, had a very long transitional period in various economic sectors," he said.

"We will make a final decision for ourselves only when all parameters, related to the need to protect our economic interests at a certain stage, are discussed and put on record," the Russian prime minister went on.

The Russian premier said Russia is expected to demonstrate "satisfactory" growth of 4% this year, but the government will seek to raise the figure to the pre-crisis level of 6-7% in the coming years.

"Those two reserve funds plus the Central Bank's gold and currency reserves make up quite a significant cushion," Putin said.

"In general, taking into account the reserves and the experience gained during the 2008-2010 crisis, I'm confident that on the whole we are ready to face any challenge armed to the teeth," he added.