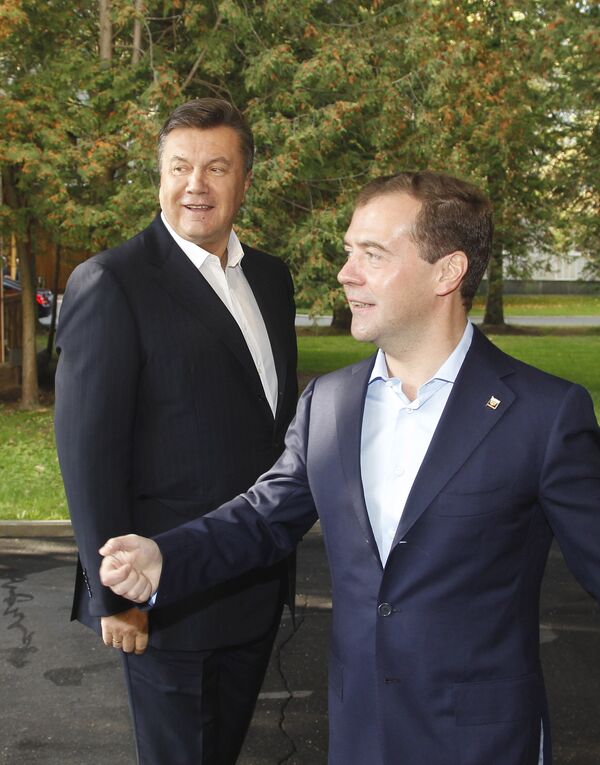 The Russian and Ukrainian presidents will meet in Ukraine’s Donetsk on Tuesday for an annual regional forum, where they might continue discussing disputed energy issues, a Kremlin aide said on Monday.

The Russian and Ukrainian presidents will meet in Ukraine’s Donetsk on Tuesday for an annual regional forum, where they might continue discussing disputed energy issues, a Kremlin aide said on Monday.

Apart from the sensitive issues of energy and the Customs Union, Dmitry Medvedev and Viktor Yanukovych and their delegations will highlight border interaction, joint research and technology, industrial ties, transport and the environment, Kremlin Aide Sergei Prikhodko said.

“I think discussions on energy will also resume,” he said.

Energy cooperation between Russia and Ukraine has been marred by a series of spats over supplies, prices and debts. Energy-rich Russia exports 80% of its natural gas to Europe via Ukrainian pipelines.

Prikhodko said Russia might also share some information about the Customs Union project with Ukraine if the latter showed interest. He added that the project’s future would affect the bilateral relations.

Russia has been trying to get Ukraine to join the Customs Union, which Belarus, Kazakhstan and Russia formed earlier this year. Moscow has made Ukraine’s membership a precondition for gas price discounts.

Ukraine is willing to integrate with Europe and form a free trade area with the EU. Russia is concerned Ukraine's plans could threaten its markets.

The Kremlin aide also said the case of jailed former Ukrainian premier, Yulia Tymoshenko, would not be under discussion.

“Tymoshenko’s case is not on the agenda,” he said, adding that Russia planned to focus on positive elements and on pressing regional issues.

Tymoshenko, 50, was jailed for seven years last Tuesday for exceeding her powers in signing a gas deal with Russia in 2009. Two days later a new case was opened against her in connection with a debt she owed the Russian Defense Ministry.

Prikhodko said a political dialogue, preparations for the summit of former Soviet republics in Moscow in December, a planned session of the Russia-Ukraine interstate commission, investment, humanitarian and high-tech cooperation will also be on the agenda at the Medvedev-Yanukovych meeting.

After the narrow format talks, the two presidents will attend a plenary session of the forum to be followed by a joint news conference and a visit to an exhibition devoted to regional and border cooperation.

The Kremlin press service said trade between Russian and Ukrainian regions had dramatically increased in the past few years. Nineteen Russian regions share 90% of this trade worth $3.2 billion.

The forum in Donetsk is expected to produce a series of agreements but no commercial deals are in plan, Prikhodko said.