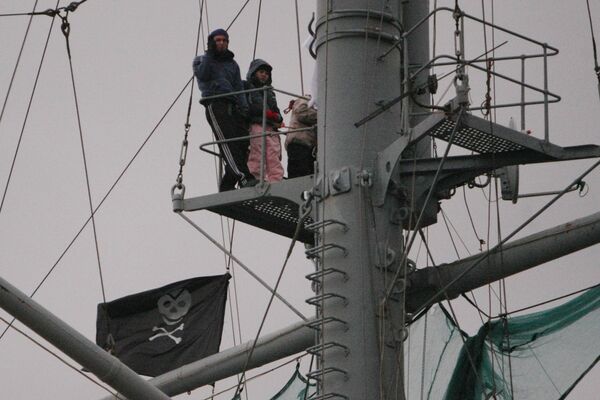 The person who was behind hoisting a pirate flag on the legendary Russian Aurora cruiser, a symbol of the 1917 Bolshevik revolution, was detained on Monday.

The person who was behind hoisting a pirate flag on the legendary Russian Aurora cruiser, a symbol of the 1917 Bolshevik revolution, was detained on Monday.

A group of activists on Sunday attempted to climb up the masts of the Aurora, now a museum ship permanently moored in St. Petersburg. Five activists were detained by police officers, while three others managed to climb the mast and hoist the Jolly Roger - a black flag with a human skull and crossbones.

"One of the organizers was established and detained," St. Petersburg police chief Mikhail Sukhodolsky said.

The police chief identified the organizers and perpetrators as political activists who "have taken a most active part in Marches of Dissent."

Two organizations - a local "Narodnaya Dolya" ("People's Take") group and the "Food for Bombs" movement - claimed responsibility for the campaign, saying it was a protest against poverty in Russia ahead of the International Day for the Eradication of Poverty.

The Aurora, often referred to as "the ship of the Revolution," is famous for firing a blank shot to signal the start of the Winter Palace assault. The assault, in which the ship's crew also took part, was the last episode of the 1917 October Revolution.