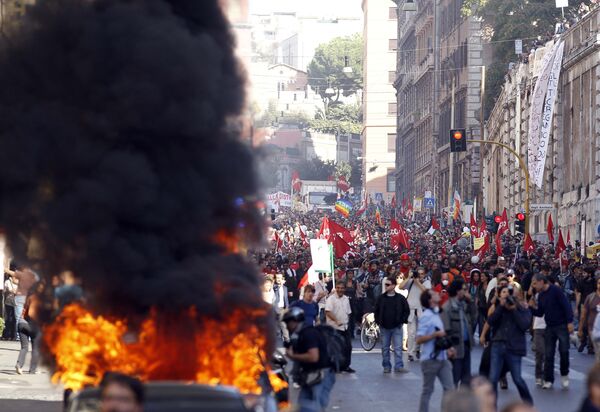 The number of those injured in Saturday’s street violence in Rome, the worst in years, has risen to 135.

The number of those injured in Saturday’s street violence in Rome, the worst in years, has risen to 135, the Ansa news agency has reported.

Clashes between police and protesters erupted on a day of worldwide protests against global financial policies as hundreds of masked, hooded protesters torched cars, smashed shop and bank windows and set fire to dumpsters and military depot building in the city centre.

Out of those injured in the violence 105 were police officers and 30 protesters, two of whom, injured by exploding smoke bombs, had fingers amputated, the repot said.

Previous reports put the number of those injured at 70.

It took police about four hours to disperse the protesters using tear gas and water canons. Twelve people, aged between 20 and 30, have been arrested. The cost of the damage caused by the riots has been estimated at more than 1 million euros ($1.4 million).

The country’s interior minister, Roberto Maroni, condemned the "unprecedented violence,” while Rome Mayor Gianni Alemanno described those responsible for the unrest as "animals.”

Some 100,000 people took part in the demonstration in the Italian capital as thousands of people in some 950 other cities in 80 countries took to the streets on Saturday in solidarity with the month-long Occupy The Wall Street action in New York against what they called “the financial terrorism” of the authorities.