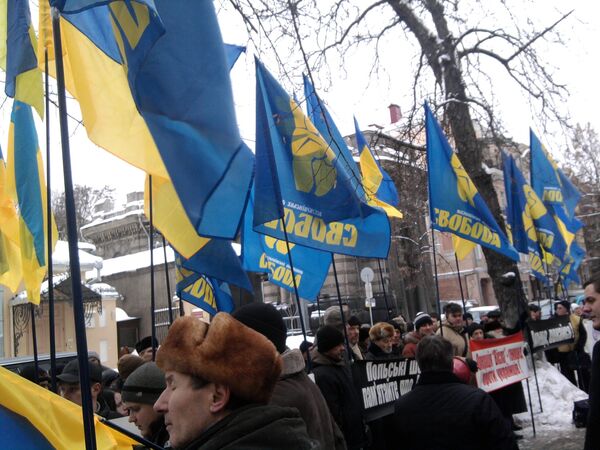 Up to 30,000 Ukrainian nationalists and communists will march in Kiev on Friday in two opposing rallies for and against the recognition of WWII-era Ukrainian Insurgent Army members as fighters for Ukrainian independence, Kiev police said.

Up to 30,000 Ukrainian nationalists and communists will march in Kiev on Friday in two opposing rallies for and against the recognition of WWII-era Ukrainian Insurgent Army members as fighters for Ukrainian independence, Kiev police said.

Some 2,000 police officers will be deployed in central Kiev on Friday in order to prevent clashes between supporters of the nationalist Svoboda (Freedom) party and communist demonstrators, police spokesman Volodymyr Polyshchuk said. Skirmishes have occurred between the two communities' members during similar marches in the past few years.

Before, during and after WWII, the Organization of Ukrainian Nationalists and its militant wing, the UPA, fought for Ukrainian independence first from Poland and then from Nazi Germany after it became apparent that Germany had no plans of giving the Ukrainians sovereignty. However, later the organization rejoined German efforts to fight against a common enemy, the Soviet Union.

Ukrainian society is divided over Ukrainian Insurgent Army recognition. One part, mostly residents in eastern Ukrainian regions bordering Russia, believe that UPA fighters were traitors who were killing Soviet soldiers, while the others, mainly residents in western Ukraine, treat them as patriots who were fighting for an independent Ukraine.

The Svoboda party has requested the authorities to sanction a demonstration involving 2,500 people, the maximum number allowed by Ukrainian law, but many more people are expected to attend the rally, Polyshchuk said. He did not specify on the number of communist supporters allowed to participate in the alternative march.

Communist lawmaker Oleksander Golub told Ukrainian tabloid Segodnya his party supporters would "act within the law." But if there are provocations from the opponents' side, he said, "then we are ready to punch back."

Svoboda leaders have called on their supporters to gather near a monument to Ukrainian poet and writer Taras Shevchenko to march along a central street in Kiev. The demonstrators will demand that President Viktor Yanukovych withdraw his decision to strip WWII-era nationalist leaders Stepan Bandera and Roman Shukhevych of their Hero of Ukraine titles.

Former Ukrainian President Viktor Yushchenko, known for his promotion of Ukrainian nationalism, awarded Shukhevych and Bandera the title of a national hero in 2007 and 2010, respectively.

The decree honoring Bandera provoked anger from both Russia and the West, with late Polish President Lech Kaczynski saying it ran contrary to the historical truth.

A Donetsk-based lawyer later appealed the decree in a local court on the grounds that the national hero status can only be conferred to Ukrainian nationals, which Bandera was not as Ukraine became an independent state only in 1991. In April 2010, a Donetsk court also declared the granting of the title to Shukhevych illegitimate on the same grounds.

Both decrees issued by Yushchenko were repealed by the country's new leader, President Viktor Yanukovych, who is seen as a more pro-Russian politician than Yushchenko.