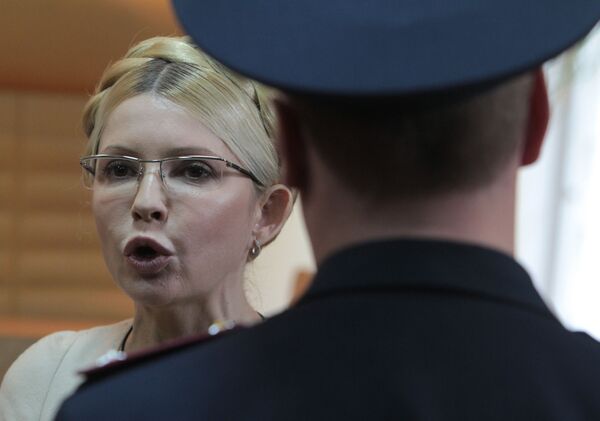 The guilty verdict handed down Tuesday by Pechersky Court in the trial of former Ukrainian prime minister Yulia Tymoshenko marked the end of an era in the country.

The guilty verdict handed down Tuesday by Pechersky Court in the trial of former Ukrainian prime minister Yulia Tymoshenko marked the end of an era in the country. Ukrainians were already fed up with the protracted trial; they debated the outcome of the trial as if they were betting on a match. Only 2,000 or so supporters came to the courthouse on Tuesday to support Tymoshenko, a far cry from the hundreds of thousands that took to the streets in the Orange Revolution of December 2004. Ukrainians appear to be tired not only of the trial but of Tymoshenko herself.

According to a poll released by Rating Group on September 29, 46% of respondents see the charges against Tymoshenko as justified, while 34% think that the trial is politically motivated. Only 13% were prepared to protest in support of Tymoshenko, far less than the number of supporters of Tymoshenko’s Batkivshchyna party.

The trial has cast a spotlight on a number of new trends in Ukrainian politics.

Tymoshenko and the era of “wild capitalism”

The trial is a kind of symbolic end of primitive capital accumulation in Ukraine. Tymoshenko is a child of the 1990s – an era of excess, outsized profits, and wild capitalism. According to Ukrainian media, Tymoshenko’s company Unified Energy Systems of Ukraine was by 1997 one of the ten largest companies in the post-Soviet space.

Tymoshenko personified a new type of politician, unaffiliated with the Communist Party and unburned by socialist prejudices. What she had was an iron grip; what she lacked was a sense of moderation.

Fifteen years on, she seems like a relic of this old era, with its shady rules and general lawlessness. Times change, but Tymoshenko’s outlook has not.

In her business career she attempted to dominate the energy industry, which yielded considerable profits for minimal investments. According to former Ukrainian oligarch Igor Bakai, Ukraine’s new rich made their fortunes off of Russian natural gas, Yulia Tymoshenko included.

As a businesswoman she also had an iron grip. She preferred working with the gas schemes to anything else; here she felt fully in her element, regarding politics as a mere extension of her business.

The Tymoshenko trial also marks the end of the Orange Revolution, which was not really a revolution at all, as it produced no systemic changes or tectonic shifts in Ukrainian politics. Millionaires rebelling against billionaires was how Ukrainian political scientists characterized the events of 2004 and 2005. Naturally, no good came of it. Tymoshenko was a billionaire that sought to join and harness the revolution.

But she would never accept a place in the backseat. Her desire for power was too great to play second fiddle to Viktor Yushchenko. As early as the summer of 2005, Prime Minister Tymoshenko attempted to concentrate power in her hands. This ultimately led to her dismissal and a rift in the

Orange camp. Subsequent years saw confrontations between the supporters of Yushchenko and Tymoshenko, Tymoshenko and Yanukovych…
The Tymoshenko trial is the last installment of the Orange Revolution. Strange though it may seem, its slogans form the basis of Viktor Yanukovych’s political platform.

Law and order are coming to Ukraine

The Tymoshenko trial has also put an end to the wicked tradition of political protection. An unwritten rule took hold in Ukrainian politics, according to which both the winners and losers abide by a “non-aggression pact” of sorts. No charges were brought against members of the outgoing government, and their successors never had to worry about what tomorrow might bring.

But Generalissimo Franco’s dictum “for friends, anything – for enemies, the law” no longer applies in Ukraine. Over the last year and a half, criminal charges were brought against 78 members of the former government; and more than 500 criminal cases have been opened against sitting officials.

Tymoshenko is simply the most prominent of all the VIPs brought to trial, while her press office and PR team are more active than their opposite numbers in the Yanukovych camp.

Obviously, Mr. Yanukovych is in the mood for bold decisions. The Tymoshenko case is creating a precedent in Ukrainian public life. There will be no more untouchables; service to the state and popularity will not absolve officials of future wrongdoing.

The verdict is also a signal to Yanukovych’s inner circle: there will be no free reign. According to available information, the main sponsors of his Party of Regions are fretting over Tymoshenko’s fate. No one feels above the law. While this is may not be the triumph of the rule of law in Ukraine, it is certainly a first step.

Viktor Yanukovych made it clear that he would not interfere in the trial. European and Russia leaders are urging Mr. Yanukovych to free Tymoshenko, but the president clearly cannot release her from custody or dismiss the case by fiat. Any such move would have made the courts totally illegitimate in the eyes of the public. Tymoshenko’s guilty verdict is meant to demonstrate to the West and East alike that Yanukovych will not bend to outside pressure and, therefore, there is no sense in presenting him with ultimatums. In this difficult period of upheaval and disorientation in the world, the Tymoshenko trial has declared Ukraine’s bid for an independent role in the world. “We know a thing or two, and we won’t have terms dictated to us” – this seems to be the new posture. Time will tell if it can be sustained. It certainly won’t be easy.

Kost Bondarenko is the chairman of the board of the Institute of Ukrainian Politics, Kiev.