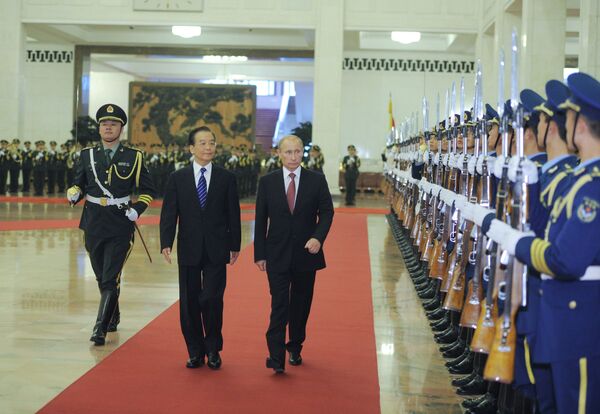 © RIA Novosti . Alexei Druzhinin
/
Go to the photo bank
Subscribe
Economic cooperation of Russia and China is not limited to fuel supplies as the two states are involved in numerous projects in traditional cooperation areas and high-tech industries, Russian Prime Minister Vladimir Putin said on Tuesday.

Economic cooperation of Russia and China is not limited to fuel supplies as the two states are involved in numerous projects in traditional cooperation areas and high-tech industries, Russian Prime Minister Vladimir Putin said on Tuesday.

"I don't think that natural gas supplies are key to our cooperation. Our cooperation is multi-faceted and it becomes more and more diversified," Putin said. "I think we should make cooperation in high-tech spheres our priority."

He said that the two states should not focus themselves on traditional cooperation areas, such as machine-building and aviation.

He said that the two states are studying numerous draft deals on hydrocarbon extraction and supplies, including joint projects to prospect and extract hydrocarbons in Russia's Republic of Udmurtia in the Volga area, joint participation in the Sakhalin-3 project in the Far East and in the Magadan-1 project to develop shelf hydrocarbon resources.

Last September, Moscow and Beijing, the world largest energy market, signed a binding supply document, which outlined the western supply route, where gas comes from Western Siberia and the eastern route from Eastern Siberia, Russia's Far East and Sakhalin. The western route is the basic and Russia's gas export monopoly Gazprom plans to start building the Altai gas pipeline, estimated to cost $14 billion, in the middle of this year and launch it at the end of 2015.

Russia's gas giant Gazprom and China's oil and gas corporation CNPC were expected to sign a final agreement on a price for gas deliveries at the St. Petersburg International Economic Forum but failed to do so. Under the future contract, Gazprom may deliver up to 68 billion cubic meters of gas to China in a 30-year period.

"The discussions on price formula are of course, pivotal. The buyer wants to buy cheaper and the seller wants higher prices. We do not bargain at the political level, this is the task for our companies. I think they would find a fair, mutually beneficial solution to this issue," Putin said.

He also said that Russia resumed electricity supplies to China and now studies the possibility of building more power plants on the Russian territory.