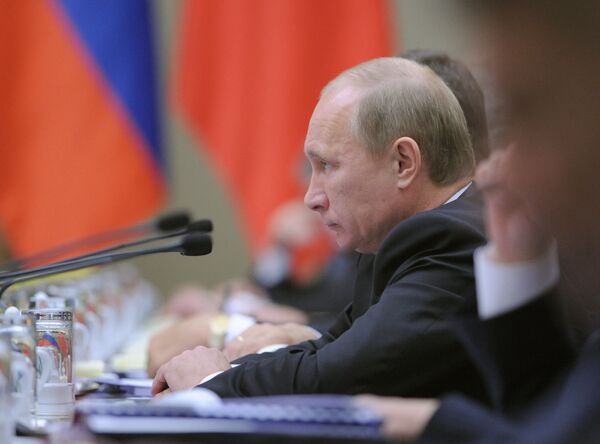 Moscow and Beijing are close to signing a long-awaited 30-year gas deal, Prime Minister Vladimir Putin claimed on Tuesday during his visit to China where energy talks topped the agenda.

Moscow and Beijing are close to signing a long-awaited 30-year gas deal,  Prime Minister Vladimir Putin claimed on Tuesday during his visit to China where energy talks topped the agenda.

"We are nearing the final stage of work on gas supplies to the Chinese market," Putin said.

Russia expected to sign an agreement between the world's largest gas producer and the world's fastest growing energy market this summer, after years of negotiations, but the two sides failed to agree again on prices.

China, which intends to buy up to 68 billion cubic meters of gas per year, wants to pay $250 per thousand cubic meters, while Moscow wants to sell its gas at prices no lower than it sells to Europe.

Russian Deputy Prime Minister Igor Sechin said the parties agreed that Russia would supply no less that 30 bcm through the $14 billion Altai pipeline, the so-called western corridor, and would specify details on the gas road map in the next 15 days.

"Today we have agreed that the western corridor envisages supplies of no less than 30 bcm of gas," said Sechin, who is in charge of energy issues in the Russian government, adding talks on the price formula had progressed considerably.

In 2010, Moscow and Beijing signed a binding agreement stipulating construction of two corridors to supply Russian gas to China. In the first, Russia would develop West Siberian fields, while the second one envisaged developing the gas deposits of East Siberia, the country's Far East and the shelf of the Sakhalin island. Head of Russia's gas export monopoly Alexei Miller has said gas supplies to China through the western corridor was a priority while the eastern corridor was not discussed.

Imports of Russian gas will provide China vital supplies for its rapidly growing gas market, which is already attracting increasing volumes of liquefied natural gas by ship and receiving gas from Turkmenistan via a pipeline.

Sechin also said that Russia and China had settled an on-going dispute over oil supplies, with an agreement on accumulated debt and a price formula.

"We have reached an agreement in principle, which will be fixed at corporate level," Sechin told journalists. "The issue is off the agenda."

In January, Russia's Transneft oil pipeline monopoly and Rosneft oil giant started crude supplies to China via the East Siberia-Pacific Ocean pipeline under a $22 billion deal, but later said that China National Petroleum Corporation had underpaid for the crude supplies and unilaterally cut payments by 7 percent.

The Chinese repaid some of the debt in June, but later cut payments again. The Russian companies have threatened to take the matter to court.

Putin said Russia and China have reached an unprecedentedly high level of political and humanitarian cooperation.

"In the political and humanitarian field we do not have problems at all. We have really reached a very high, unprecedentedly high level of cooperation," Putin said, admitting that in the economic field the parties often faced disagreements.

"The seller wants to sell at a higher price, while the buyer wants to buy at a lower price. We have always managed to reach a compromise which would satisfy both parties."