Tymoshenko sentenced to seven years in abuse of office trial 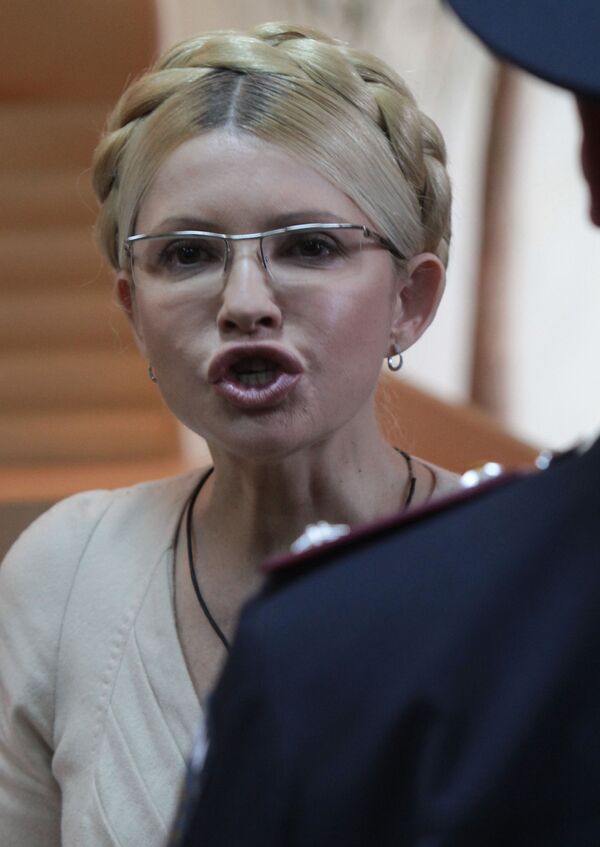 Former Ukrainian Prime Minister Yulia Tymoshenko was given a seven-year prison sentence after being found guilty on Tuesday of abuse of office over her signing of a gas deal with Russia in 2009.

Former Ukrainian Prime Minister Yulia Tymoshenko was given a seven-year prison sentence after being found guilty on Tuesday of abuse of office over her signing of a gas deal with Russia in 2009.

Judge Rodion Kireyev said Tymoshenko, one of the leaders of Ukraine's pro-Western Orange Revolution, had exceeded her powers by personally issuing directives related to the deal.

He also ordered Tymoshenko to pay compensation of $189 million in compensation for losses incurred by Ukraine’s gas monopoly Naftogaz.

Tymoshenko said she would contest the conviction, and spoke up as the judge read the verdict, saying the judge was “taking Ukraine’s freedom.” The judge paid no attention and continued reading.

“The verdict won’t stop me,” she said.

Tymoshenko said she would ask the European Court of Human Rights to “defend her honor” and decide whether her conviction was a vendetta by President Viktor Yanukovych.

Tymoshenko’s lawyer said she would appeal the verdict.

“We hope that today we will get judicial permission and in the next few days will file an appeal,” lawyer Yury Sukhov told the press.

“The verdict handed down by Judge Kireyev is of course a disgraceful page in the history of Ukrainian justice. This decision by the court criminalized Tymoshenko’s political actions and decisions,” he added.

The verdict came about as the result of “interference,” he said.

Top human rights activist Tatyana Montyan said Tymoshenko will have to spend at least one month in custody before prosecutors consider an appeal.

“There is no way to drag her out of there before the appeal decision,” Montyan told RIA Novosti.

The conviction is likely to have huge implications for the country's political future, affecting the course of relations with the European Union and relegating her to the political wilderness.

Tymoshenko has consistently claimed the trial is politically motivated and accused current President Viktor Yanukovych, her arch-rival during the Orange Revolution, of masterminding the prosecution. As a convicted criminal, she would be unable to participate in Ukraine's next presidential elections in 2015.

Tymoshenko said earlier that the severity of her sentence depended on the extent of Yanukovych’s “amorality,” she said.

“It is not Judge Kireyev but President Yanukovych who is handing down the verdict,” she said, adding she had not heard one word of truth from the judge as he read out the verdict.

The process was broadcast live by several Ukrainian TV channels.

Tymoshenko said she was in good health despite her prolonged custody, and would keep fighting the Yanukovych regime.

She called on Ukrainians to join her in the struggle against what she described as the “authoritarian regime” of President Yanukovych.

“I ask you, don’t be afraid of the regime! Ukraine will definitely get rid of this authoritarian regime. A dictatorship and an authoritarian regime will be removed in the near future,” she said during a break in the court hearing at the Pechersky District court in Kiev.

"No one – not Yanukovych, not Kireyev - can degrade my honest name,” she said.

A group of pro-Tymoshenko deputies from her BYuT-Batkyvshina party tried to break into the court earlier during the reading of the verdict.

"You can see what is going on here - they won't let us in even though that's illegal," said one deputy.

About 800 Tymoshenko supporters, and 1,000 anti-Tymoshenko demonstrators who support the ruling Party of the Regions gathered outside the central Kiev court before the verdict was delivered. About 1,100 policemen were at the scene.

If there is a guilty verdict Ukraine will not be able to sign an association agreement, and we will turn into something like Belarus,” Arseniy Yatsenyuk, leader of the Front of Change party, told supporters outside a court in Kiev.

Ukraine is expecting to clinch associate EU membership and free trade zone with the 27 EU nations this year.

“We will ask the European Court to speed up the consideration of the Tymoshenko case,” Yatsenyuk said.

The verdict had been predicted by Tymoshenko's supporters. "She'll get seven years," said deputy Sergei Mishenko from her BYuT-Batkyvshina party on Tuesday morning, just before the verdict was read. He said the opposition had a plan of action in the event of a guilty verdict, but would not disclose details.

The trial has also drawn much criticism from the West. The EU has voiced its support of Tymoshenko and said that the verdict will be taken into consideration when deciding Europe’s future relations with Ukraine. If Tymoshenko is jailed, Brussels has said it will deny Kiev the EU Association Agreement it covets.

Human rights organizations condemned the trial and the verdict on Tuesday.

“The prosecution against Yulia Tymoshenko is politically motivated. The charges against her are not internationally recognizable offences, they are attempts to criminalize decisions that she made in the course of her work," said Amnesty International's Deputy Programme Director for Europe and Central Asia, John Dalhuisen.

"Poor political decisions of this kind – if that is what they were - should be punished by voters, not through courts. Her conviction on these charges is illegitimate and she should be immediately released. The trial against Tymoshenko highlights systemic problems within the justice system in Ukraine, and the conduct of this trial casts doubt over the independence of the judiciary," Dalhuisen said.

The gas deal signed with Russia in 2009 linked the price of gas for Ukraine to world oil spot prices. Oil prices subsequently rose sharply, dealing a severe blow to much of Ukraine's heavy industry such as pipe-making and metallurgy. The current government claims those decisions cost Ukraine huge sums of money.

In April 2010, Ukraine's state energy company Naftogaz and Gazprom signed an additional agreement with a discount of $100 per 1,000 cubic meters of Russian gas in exchange for Ukraine's agreement to extend Russia's lease on the naval base at Sevastopol in Crimea until at least 2042.

The contract ties Ukraine to importing no less than 33 billion cubic meters of gas from Russia. Ukraine is set to pay about $400 per thousand cubic meters of imported Russian gas in the fourth quarter of this year.
Kiev insists on reducing both the price and the volume of imports.

Until now, Moscow has refused to re-negotiate the deal, saying this was possible only if Ukraine joined a Russia-led customs union, which Ukraine said would go against its goal of integrating with the European Union.

"We expect to find a compromise in the next 10 to 15 days," Azarov told reporters.