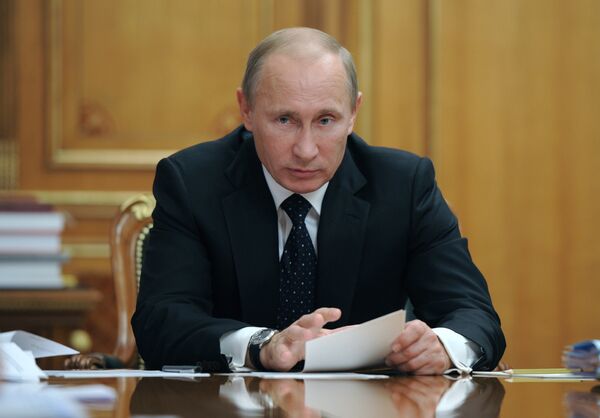 Russian Prime Minister Vladimir Putin, who marks his 59th birthday on Friday, has caused a Twitter flash mob with a hashtag devoted to his birthday topping the world’s trends.

Russian Prime Minister Vladimir Putin, who marks his 59th birthday on Friday, has caused a Twitter flash mob with a hashtag devoted to his birthday topping the world’s trends.

The hashtag #CпасибоПутинуЗаЭто, which can be translated as “thank Putin for that,” appeared early on Friday when the pro-Kremlin United Russia party’s member, Vladimir Burmatov, decided to congratulate the premier with the ironic tweet: “The summer hasn’t left Moscow yet, thank Putin for that.”

“I wanted to make some fun on premier’s birthday,” Burmatov said in an interview with BBC Russian service. “I expected to play this game with my 30-something thousand readers. And it turned to attract broad masses of people.”

“Have uncensored Internet? Thank Putin for that,” Burmatov posted later, causing a wave of similar tweets.

Since almost 50 percent of Russian-speaking Twitterites are Muscovites in their late 20s and early 30s that are known for their staunch criticism of Putin, the birthday hashtag inspired them to stage a poetic flash mob that quickly turned into the marathon of sarcastic verses.

“Russia leaves the souls of poets dead, thank Putin for that,” wrote one of the Twitter users, @IvanBerezov.

“Have no money for the flat, thank Putin for that,” posted @KatiKleine.

"Lack of free food drives us mad, thank Putin for that," one of the journalists in a Russian news agency wrote after the company announced a closure of a so-called “bonus-bar” where the workers could have a free daily snack.

“Brezhnev has returned from the dead, thank Putin for that,” wrote @galerist, Russian art dealer Marat Gelman, referring to the widely spread claim that Putin’s return to power would cause a long-lasting stagnation, similar to the one during Leonid Brezhnev’s 18-year tenure.

It is not the first time when Putin receives a birthday present in such a creative manner. Last year a group of young girls, students of journalism in Moscow State University (MGU), made the world’s headlines when they published a birthday calendar for Putin, in which they posed in lingerie.

This year the MGU students of journalism issued a coloring book, called “Vova and Dima” [the contracted versions of the ruling duo’s first names] that featured two little boys, resembling Putin and Medvedev.

On Tuesday Putin's spokesman Dmitry Peskov said that his boss has no account in social networks and rarely uses Internet.