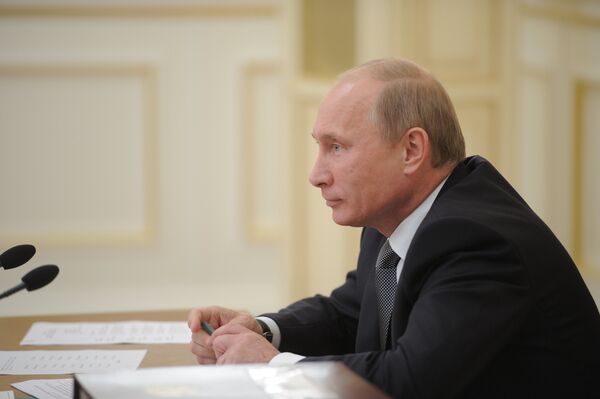 No "second wave" for Russia

The global economy continues to crawl out of recession, and Russia, for one, does not see a "second wave" of the crisis, Prime Minister Vladimir Putin said at the Russia Calling investment forum, sponsored by VTB Capital.

"We [...] warn against fanning tensions," he said. "I agree with those who think that we are emerging from the crisis. I agree that this stage will likely last long, but it is nevertheless the beginning of a recovery."

Moreover, if a second wave does strike, as Economic Development Minister Elvira Nabiullina told the forum, Russia's economy, measured by GDP, will resume growing by 2.5%-3.7% as early as 2012-2014.

Russia is indeed in a more advantageous position than other countries, with a low sovereign debt level and, unlike in 2008, a financial sector in good condition, Nabiullina said on Wednesday, Oct. 5, during the Government Hour meeting in parliament.

"Since then banks have significantly improved their foreign currency positions and the quality of their assets," the minister said. Russia has also secured substantial international reserves as well as a large surplus in its current account. And unlike in 2008-2009, its stock market is not overheated.

Admittedly, in a worst-case scenario - say the price of oil falls to around $60 per barrel - the federal budget deficit could soar to 4.5% of GDP from the 1.6% projected in next year's budget.

A different kind of crisis

The global economic problems of 2011 were caused by the unsound monetary and fiscal policies pursued by a number of countries, said first deputy head of the Bank of Russia, Alexei Ulyukayev.

Mr. Ulyukayev believes that the crises of 2008 and 2011 are very different. This year's problems are not the result of the economy overheating, as was the case in 2008, when a critical amount of risk had accumulated in the system; rather, they are the result of poor assessments of the situation and bad management, which led to excessive lending, a dramatic decline in market liquidity, and other shocks to the market.

This amounts to a cooling of the economy, with both households and businesses saving significantly.

For once analysts and government officials agree: Russia has a chance of coming through 2011 unscathed.

"Circumstances are more favorable for Russia than they were in 2008," Yaroslav Lissovolik of Deutsche Bank told RIA Novosti. "The economy is not overheating, so a repeat of the 2008 meltdown is highly unlikely," he said.

Businesses are in better shape than three years ago, Lissovolik said. The government's efforts to mitigate the ill effects of the 2008 crisis have helped them cut their debt and reduce currency risks.

The country's rainy-day funds are also quite encouraging. In 2008, the Central Bank's reserves totaled $597 billion, and this year they stand at $516.8 billion. "The difference is not too big," Lissovolik said.

In 2008, the Reserve Fund and the National Wealth Fund contained $220 billion; now there is $100 billion less. But companies and banks are stronger now and, consequently, will require less money to bail them out of another crisis, Lissovolik said.

The struggles of the European Union and United States seem very remote to Russia. "The only link between Russia and the rest of the world is the price of oil," Anton Struchenevsky, senior economist at the investment company Troika Dialog, told RIA Novosti. With global demand stable enough, the current price of oil is the only thing that matters. After fluctuating for a while, it finally settled at around $100 per barrel.

"If international markets remain like this, Russia won't have any problems at all," Struchenevsky said. "With its budget nearly balanced - and only a small deficit - and inflation going down, the Russian economy continues to grow. Fundamentally, if oil prices remain high, Russia's prospects look good."

If commodity prices do not collapse, the Russian ruble will remain stable as well. "One doesn't have to be an expert in conspiracy theories to understand the ruble rate forecasts," said Ruslan Grinberg, head of the Russian Academy of Sciences' Institute of Economics.

"There is only one factor that matters - the price of a barrel of crude," he said. "If that price is around $100, the ruble will remain stable."