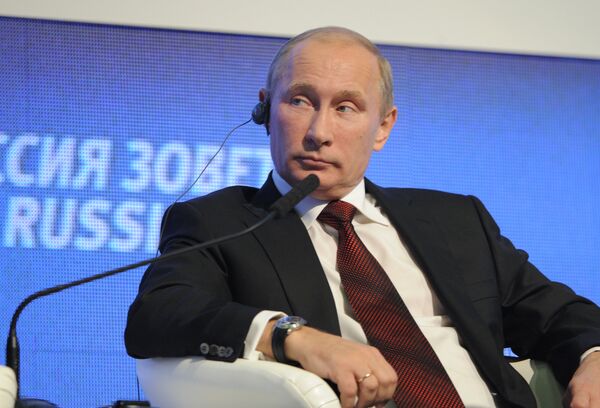 Russian Prime Minister Vladimir Putin rejected on Thursday the widely-shared opinion that a new economic crisis is looming, saying the world economy was on the path of recovery.

"We don't think so and urge others not to overdramatize the situation. I agree with the experts who say that we are on the way of recovering from the crisis. This recovery will be lengthy but still this will be recovery," Putin told an investment forum.

The Russian government is prepared to provide assistance to companies whose risks are not excessive. This aid will be similar to the stimulus measures the government took during the crisis two years ago, Putin said.

The Russian economy has the potential to show some growth, even if Russia faces a new wave of crisis, and keep its budget deficit at 4.5 percent of gross domestic product, Economic Development Minister Elvira Nabiullina noted.

Under the draft budget for the next three years, the budget deficit will range from 0.7 percent to 1.5 percent of GDP, she said. The ministry has also gauged how it may change if a new crisis hits Russia.

"Even if unfavorable world trends persist, our economy will resume growth at 2.5-3.7 percent of GDP in 2012-2014 even under these stress conditions, drawing on internal sources of growth," Nabiullina said.

However, foreign investors say that the global economy’s current difficulties limit Russia's growth possibilities as its economy is driven by external factors.

"If we look at the Russian market, it is no secret that it is highly correlated to external drivers... We are going through a pretty tough period for this market today," said Nadya Wells from Capital International, which has been investing in Russian for 15 years.

In particular, uncertainties and volatility in the world's markets impede the country's opportunities to raise financing as capital is fleeing marginal economies with higher risks.

"Russian is still not an extremely important economy," David Bonderman, co-founder of U.S. TPG Capital, which owns stakes in Russian second-largest lender VTB and retailer Lenta. "In times of extreme volatility, this is perceived to be a risk for investors and people begin to flee marginal economies."

Russia has been losing capital since the fourth quarter of 2010 after a reshuffle in the Moscow administration, and the capital continued leaving heavily the country in 2011. Only in September, Russian net private capital outflow amounted to $13 billion, the authorities expecting it to reach $36 billion by the end of the year.

The ongoing capital flight raises questions for investors. "If your own elite is not reinvesting in your country, why should we invest here?" Wells said.

"(Russia's) reputation is not good. This surprises no one," Bonderman said.