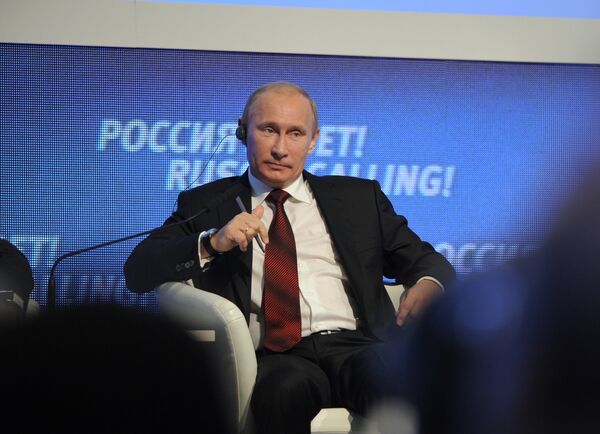 © RIA Novosti . Yana Lapikova
/
Go to the photo bank
Subscribe
Russia does need economic and political changes but they will be evolutionary, Prime Minister Vladimir Putin said on Thursday.

Russia does need economic and political changes but they will be evolutionary, Prime Minister Vladimir Putin said on Thursday.

“We need no upheavals - we need a great Russia,” he told an investment forum in Moscow.

“We will proceed very cautiously, consolidating the fundamentals of our political system, and developing it,” he said.

“I believe that both I and the incumbent president, Dmitry Medvedev, have sent a clear and unambiguous signal to the country: We do not intend to crush, slice up or break anything.”

Putin, who is going to run for president in March 2012, said “predictability of the policy course, political stability is just as important as macroeconomic stability.”

“We do not intend to stand still, but will act on the assumption that our citizens and our partners in the economic, as well as the political field, feel the continuity of our course, feel that they are dealing with a stable, respectable country in which they can invest their money and with which they can and should cooperate,” he said.

To attract investment in Russia, it is essential to minimize risks, both economic and administrative, he said.

The state must not supersede business and private initiative needs to be given “more room to maneuver.”

“The mission of the state is to lend a helping hand to a businessman wherever necessary, and remove obstacles that are standing in his way,” Putin said.