Russia, China should explain their veto to Syrians - Clinton 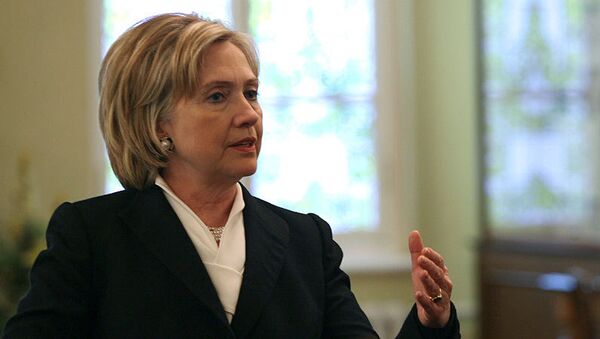 Russia and China should explain to the Syrian people why they vetoed a Security Council resolution, U.S. Secretary of State Hillary Clinton said.

Despite three months of debates, the 15-nation UN Security Council failed to reach a compromise on the draft resolution on Syria. Russia, which sells arms to Syria, and China applied their veto-wielding power to block the Western blueprint late on Tuesday.

"We believe the Security Council abrogated its responsibility yesterday," Clinton said. "The countries that chose to veto the resolution will have to offer their own explanations to the Syrian people, and to all others who are fighting for freedom and human rights around the world."

"Those countries that continue to send weapons to the Assad regime that are turned against innocent men, women and even children, should look hard at what they are doing," Clinton told reporters.

The U.S. Secretary of State said those who vetoed the resolution were "standing on the wrong side of history."

The U.S. envoy to the UN Security Council on Wednesday expressed outrage at Russia and China for blocking a draft resolution, saying it was a "slap in the face" of the people of Syria.

A State Department spokeswoman Victoria Nuland said later in the day the results of the Security Council's vote were "extremely disappointing," as the resolution was weakened significantly during the negotiations.

"The text that we supported yesterday was far weaker than we would have liked. It didn't include the teeth of sanctions, and even that proved to be too much," the spokeswoman added.

The Russian foreign ministry issued a statement saying that the draft resolution failed to rule out any military intervention, and the country may face an international military operation, similar to Libya.

The Syrian government has used force to crush opposition protests, which followed a wave of uprisings in other Arab countries in spring. The UN says some 2,700 people have died since the start of the protests in March.

The United States, Canada and the EU have already imposed unilateral sanctions on Syria and have called for Assad to step down.