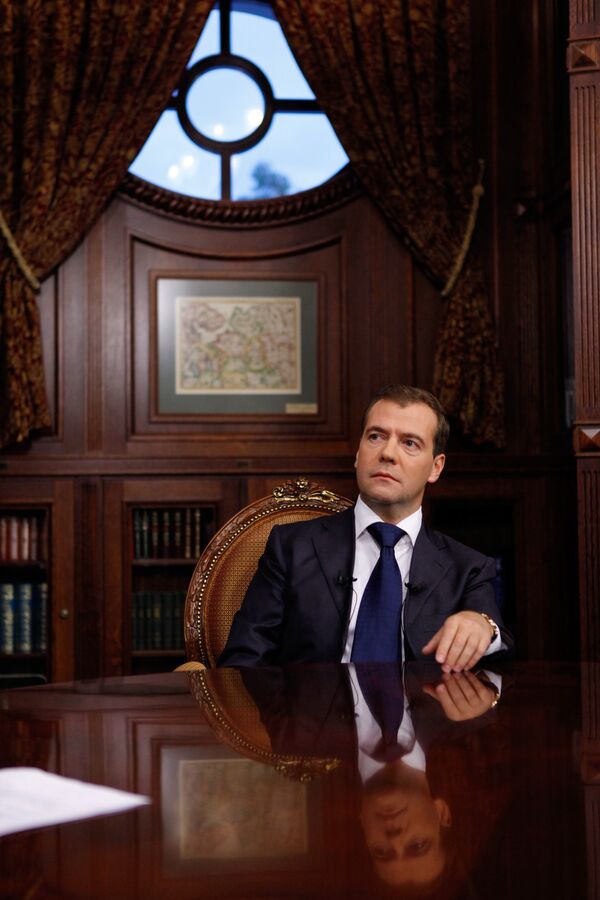 President Medvedev's television interview to Channel One, Rossiya, and NTV was an attempt to allay concerns following a sharp role reversal in the ruling tandem last week. He reaffirmed his allegiance to universal democratic values and explained how he and Vladimir Putin decided which of them would run for president. He also said that it is the voters who make the ultimate choice and assured everyone that the United Russia conference has not predetermined the outcome of next year's presidential election.

"The decision of the conference is just the party's recommendation to support these two candidates in the elections, but it is the voters who make the ultimate choice," Medvedev said, as quoted on kremlin.ru. "Any party and any politician can fail in the elections."

A lack of "limited uncertainty"

True to his principle of staying the middle course in politics without veering too much to the left or right, Medvedev was attempting to achieve two goals with his interview.

First, he wanted to dispel any illusions on the part of "palace revolution" enthusiasts, who for the past few years have been hoping that a rift between Medvedev and Putin would unbalance the power vertical. And second, he wanted to stir up voters who have sunk into apathy, believing, as a result of the speeches of the two leaders at the United Russia convention, that the party's victory is pre-determined.

Medvedev touched upon the first issue at the beginning of the interview. He said that he and the prime minister "share very similar positions on most of the strategic issues. [...] So, if you look at things from this point of view, what reason could we have to quarrel and argue with each other?" he asked. He later answered his own question: "But you don't see this kind of thing in any country," he said, and cited the example of the United States. "Can you imagine a situation where Barack Obama, say, starts competing against Hillary Clinton?"

The second issue is proving to be more complicated. It is difficult to mobilize an electorate for a battle in which the winner has not changed in over 10 years. Of course, it will take a lot more hard work for Russia to create a genuine multiparty system, as the president has admitted more than once. And it is mostly this factor that gets in the way of a good balance between competitiveness and predictability at elections.

"In industrialized countries, democracy is understood as limited uncertainty," said Boris Makarenko, vice-president of the Moscow Center for Political Technologies. "Each party knows that nothing dramatic will happen if it loses. Everyone knows that no matter who wins, there will be no redistribution of property and representatives of the current ruling party will not lose freedoms. In Russia, none of this is assured."

Medvedev pledges a "government made up of new people"

Since there is no visible intrigue in the upcoming State Duma elections, the president has taken it upon himself to inject some into the question of the government that will be formed after the presidential election.

"If our voters, our people [...] vote for [...] our presidential candidate, then I would be entrusted with forming the next government, and it would be a thoroughly renewed government made up of new people," Medvedev said. "I consider this principally important."

But who will these "new people" be?

"It is unclear to me what is preventing the president from renewing the cabinet now," said Valery Khomyakov, director general of the National Strategy Council. "There are some very unpopular ministers who do not even deem it necessary to answer questions about accidents that involve deaths in their departments' areas of responsibility. Destructive processes are underway in education and healthcare. If Medvedev and Putin have finished building a power vertical, what is preventing them from dealing with failing ministers? Their dismissal would only strengthen United Russia's election position."

The president's answer to this question sounded quite clearly: "But you can't simply come and set the government swinging about like a punching bag. I often get messages from people on the lines of 'Fire that minister immediately! What a disgrace! An accident happened and he is still in his post.' But we have to understand that the ministers are not responsible for every accident and that we really do have a very complicated situation to deal with in our industry and economy."

When it comes to the presidential election, the ruling tandem can benefit from the absence of any real alternatives on the political stage.

Valery Khomyakov pointed out that according to a poll conducted at the request of the National Strategy Council, 16% of voting-age Russians would vote for Medvedev, and 21% for Putin.

So it appears that Medvedev was right to withdraw his candidacy in favor of Putin, whose rating is considerably higher. But the rating of some other "new face" - that is, of an alternative figure - is even higher, at 36%.

All that remains is to find this new face, and the presidential election will again have some intrigue.