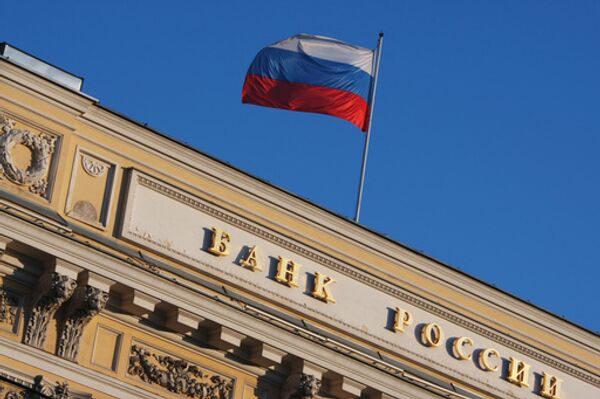 The Russian ruble is likely to strengthen only if oil prices remain at the current $100 per barrel, central bank head Sergei Ignatyev said as the ruble hit a 28-month low on Tuesday.

The Russian ruble is likely to strengthen only if oil prices remain at the current $100 per barrel, central bank head Sergei Ignatyev said as the ruble hit a 28-month low on Tuesday.

The official exchange rate of Russian ruble for tomorrow settlement fell 20 kopecks to 32.10 to the dollar and 12 kopecks to 43.36 to the euro.

"Growing fears of a new economic recession led to capital outflow from equity and currency markets of Russia and some other countries, so-called emerging markets. The ruble has fallen some 12 percent against the dollar since the beginning of September," Ignatyev told journalists.

The central bank leaves the country's capital outflow forecast for 2012 unchanged at $35 billion, Ignatyev said, adding that the situation could change.

"Currently, we depend on too many factors, including political ones. If the situation changes, we will face another picture," he said, adding that the regulator forecast a considerable capital outflow from Russia in September.

Foreign investors regarded Kudrin as the person most likely to carry out far-reaching economic reforms in the next government, with a strong concensus among Western economists that his departure was negative for the Russian economy.

Ignatyev also said the upper limit of the floating corridor of the bi-currency basket, used by the central bank to determine the ruble's real exchange rate against Russia's main trade partners, stood at 37.5 rubles, and the central bank was not considering widening the corridor from the current 5 rubles despite analysts' speculation it would do so.

"I am happy with the corridor as it is now - the width at 5 rubles and the upper limit at 37.5 rubles if I am not mistaken. I do not think it is necessary to change the corridor's parameters," he said, without ruling out changing them within one or two months.

The value of a bi-currency basket, comprising $0.55 and 0.45 euros, fell 6 kopecks at open on Tuesday and continued sliding, reaching 36.86 rubles by 17.21 a.m. Moscow time after hitting the upper limit of the floating currency corridor for two consecutive sessions.

Ignatyev said the central bank had spent $6 billion on the currency market to support the ruble in September, including $2.365 billion on Monday, when the value of bi-currency basket jumped to 37.43 rubles at open.