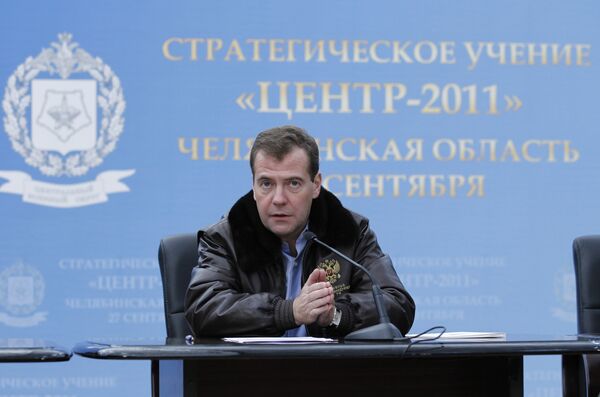 "We cannot avoid [heavy] defense spending worthy of the Russian Federation, which is not some 'banana republic' but a very large country, a permanent member of the UN Security Council that possesses nuclear weapons," Medvedev told military staff at the Center-2011 exercises.

"Had we been weak or had our Armed Forces disintegrated, as sometimes various forces within and outside our country desired, our state would have no longer existed," the president said.

"This is why, against all odds, both I as the Supreme Commander in Chief, and my colleagues will always insist that spending on defense, new weaponry, service pay, proper living conditions for servicemen...be the state's top priority...And whoever disagrees with this should work elsewhere," Medvedev said.

The president dismissed Alexey Kudrin on Monday as Russia's finance minister and deputy prime minister over long-running disagreements on fiscal spending, especially on defense and security.

"We have been neglecting these areas for a long time...and they have become a sore point," the president said.

Poor communications and lack of reconnaissance drones created serious problems for Russian troops during a brief war between Russia and Georgia over South Ossetia in 2008. The current drills showed that the issue had not yet been resolved.