Reforms or promises: With Kudrin or without, the government must choose 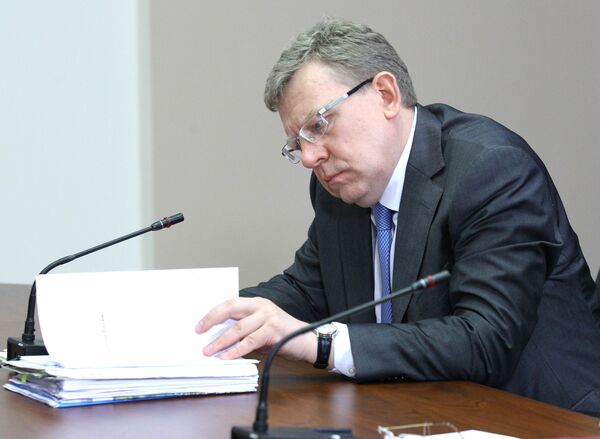 Following President Medvedev's recommendation, Deputy Prime Minister and Finance Minister Alexei Kudrin has resigned. Kudrin's frank admission about his reluctance to work in a Medvedev government and his resignation reflect the internal contradictions in the domestic economy.

Following President Medvedev's recommendation, Deputy Prime Minister and Finance Minister Alexei Kudrin has resigned. Kudrin's frank admission about his reluctance to work in a Medvedev government and his resignation reflect the internal contradictions in the domestic economy.

With or without Kudrin, after the parliamentary and presidential elections the government will be faced with a choice - either break election promises and pursue unpopular reforms or try to meet burdensome social obligations and risk driving the economy off a cliff.

Oil prices as the Sword of Damocles

Kudrin made it very clear why he does not want to work in the future Medvedev government. He said on Sunday, September 25: "I have differences with Medvedev on economic policy; they basically have to do with the considerable military spending." Kudrin added that the new decisions on the defense order, pay and pensions for service members will increase federal spending by 1.3% of the GDP, which will have a negative effect on macroeconomic indicators.

Igor Nikolayev, director of FBK's strategic analysis department, told RIA Novosti: "We should believe Kudrin when he says he disagrees with unjustified spending, especially military spending. He has proved himself a competent professional on matters of controlling spending. When this spending runs into the trillions of rubles, he understands the risks that creates for the financial system and the budget."

The budget for the next three years has been drafted (it incorporates said social and military spending) based on the average annual Urals price of about $100 per barrel of oil. But the world economy is deteriorating, and Kudrin could not rule out that the price would fall to $60. He added that the domestic economy was able to function for a year even if it were $60, but this would mean zero growth, curtailment of budget spending and more borrowing.

Kudrin consistently opposed the government's policy of spending its way out of the economic crisis. Moreover, when the crisis was at its peak, he dared to make gloomy forecasts for the domestic and the global economies, in marked contrast to any other official of his rank.

Apparently, these forecasts irritated the head of state. Some political scientists believe they complicated the personal relationship between Medvedev and Kudrin.

In 2009 Medvedev lashed out at the finance ministry at a meeting with business people in Barvikha and said what many experts saw as a rebuke to Kudrin: "When my colleagues from the government say that Russia will not emerge from the crisis for another 50 years, this is unacceptable. If you think so, go and work somewhere else."

Medvevev was more specific in an interview with the Financial Times last summer: "I believe Alexei Kudrin would be an excellent leader of a rightwing party, and he should not refuse to become one. I think it would benefit the country."

His words sounded complimentary, but some political analysts saw an unpleasant hint in them. Alexander Makarkin, deputy general director of the Political Technology Center said on this score: "A liberal party has little chance of making it to parliament. In essence, the message was that if Kudrin joins a party, he may leave the government before long."

Hostage of the situation

Kudrin's refusal to take part in Medvedev's future government takes us back to the main intrigue in the domestic economy. Experts have already noted some contradictions between Prime Minister Vladimir Putin's campaign promises at the United Russia conference and the economic challenges Russia will face in the next few years.

Top officials are announcing large-scale social programs that are based on budget spending whereas economists see economic reforms as inevitable. Speaking at the Russia-Singapore business forum, Sberbank CEO German Gref said: "Reforms are indispensable given the current situation in the country, particularly in the economy. Everyone now feels the same."

Experts believe Kudrin also realized the need for unpopular reforms but doubted that the future government would risk them. Makarkin said that even if it dared carry them out, this decision would be made in more complicated economic conditions and the finance minister could be blamed for any adverse effects. "He did not want to be responsible for a situation beyond his control," the expert said.

Ironically, Kudrin himself contributed to this situation. He came up with the idea to stash windfall oil revenue in the Stabilization Fund, which was divided into the Reserve Fund and the National Prosperity Fund in 2008.

In difficult times the government could not resist the temptation to spend the accumulated sums on the popular social programs. "The policy of saving money that Kudrin supported led to the very rise in spending that he now objects to," Nikolayev said.

Some experts believe that billions of rubles from these funds could have been put to better use. Nikolayev said: "They could have been invested in infrastructure, which produces the biggest multiplier effect. Take railroad construction, which promotes the growth of domestic demand."

But this did not happen, and since the crisis began the fund has decreased six times whereas the government is still talking about the need for large-scale road construction.

Who will replace Kudrin? It is not so much a question of personalities - although such candidates do exist - but whether the new finance minister will be a mere figurehead or an independent politician.

Makarkin said on this score: "I don't think big time political decision-making is likely. What's needed is to calm down the markets and show that the current course will continue." He thinks one of Kudrin's deputies can take his place.

Some experts believe that Kudrin is a far cry from a figurehead, and that is why he is so valuable. Yelena Matrosova, director of the BDO Center for Macroeconomic Research, said: "Kudrin enjoys prestige in the international financial community. Moreover, 45% of the Reserve Fund is deposited in European bonds, whose price may fall. It is necessary to defend Russia's interests at meetings of finance ministers now that the threat of a new crisis is looming." She thinks Presidential Aide Dmitry Dvorkovich may become the new finance minister because he has the experience and "a certain international status."

Yevgeny Yasin, research director at the Higher School of Economics, agrees: "Dvorkovich has the experience, works with the president, and will find a common language with him when Medvedev becomes prime minister."

Yasin believes that apart from Dvorkovich there are two other noteworthy candidates - VTB-24 President Mikhail Zadornov and Director of Macroeconomic Research at the Higher School of Economics Sergei Aleksashenko: "Zadornov has the right experience because he was a finance minister for several years. Aleksashenko is simply a smart and knowledgeable person."

However, Yasin does not see any equal replacement for Kudrin: "For a long time he was responsible for the sphere that was in the best possible shape and made a big contribution to the more or less decent shape of the Russian economy."

Oksana Dmitriyeva, a member of the Duma Committee on Budget and Taxes, has an opposite view. She thinks Kudrin's policies are responsible for all the problems in the domestic economy and for its difficult time during the economic crisis. "This is a consequence of Kudrin's financial and economic policy," she told RIA Novosti.