Medvedev and Putin change places: Who's the winner? 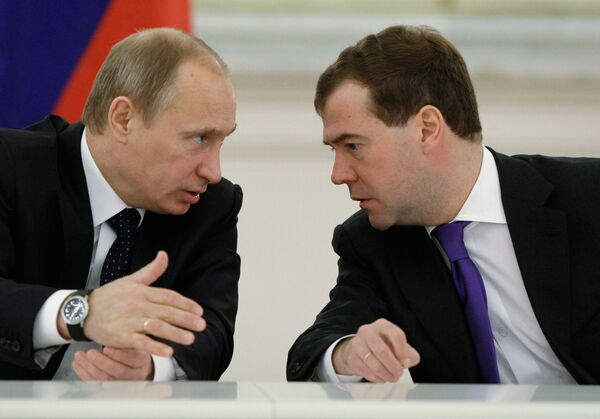 The decision of the Russian president and prime minister to swap places, announced on the second day of the United Russia party's convention, has clarified the political situation for the next six months and possibly 6-12 years.

The decision of the Russian president and prime minister to swap places, announced on the second day of the United Russia party's convention, has clarified the political situation for the next six months and possibly 6-12 years. According to amendments to the Constitution made under President Medvedev, the presidential term has been extended to six years.

But several questions remain unanswered. For example, who will lead United Russia - Dmitry Medvedev, who tops the party list, or Vladimir Putin, who is the party's unquestionable leader, and who commands exceptional authority? And what will Russia's political elite and foreign partners say about Putin's potential return as president?

Putin's press secretary clarified the matter. "He will remain the leader," he said without elaborating as to whether Putin will keep this post after the elections. Most analysts say it is unlikely Putin will abandon the party he has nurtured to maturity.

"I don't think they agreed that Putin will return as president several years ago, as some may conclude from Medvedev's speech at the convention," Igor Bunin, president of the Moscow Center for Political Technologies, said. "I believe Medvedev started bargaining with Putin for concessions only recently. These concessions include the post of prime minister and possibly nominal leadership of United Russia. His leadership will likely be nominal because one way or another Putin will remain the party's true leader."

"All issues regarding the 2012 election campaign have been decided, and now they will start thinking about the 2018 campaign, which starts right now," said Alexei Chadayev, head of United Russia's political department and assistant professor at Russian State University for the Humanities. "As for the opponents, I would describe them as people who cannot manufacture tanks but like to fight for the driver's place in them."

Indeed, who can stop the new tandem now? Internal opposition is unlikely because both United Russia and the government have hailed the decision to nominate Putin for president and Medvedev for prime minister. This unity of opinion is rooted in the fact that the key figures in the party, the government and across Russia are members of Putin's team. An assured return of their patron to the top post in the country is bound to please them.

So where is the opposition?

The official opposition has not expressed any protest. The leaders of the Communist Party and Fair Russia, Gennady Zyuganov and Sergei Mironov, said this change came as no surprise.

But the news probably disappointed those whose political careers were in some way connected to a second term for Medvedev. Answering a question about his absence from the party convention, presidential economic adviser Arkady Dvorkovich Tweeted that Luzhniki is better suited to hockey matches. "There is no reason to rejoice," Dvorkovich said during a discussion of the announcements made at the convention on social networking sites.

The decisions taken at the United Russia convention cannot be seen as a political victory for those who thought that "Medvedev should become Russia's Lee Kuan Yew," the man who was Singapore's prime minister for three decades and turned it into a prosperous state.

However, the reshuffle will not affect Medvedev's team all that badly.

"I will not be surprised if Dvorkovich or someone else from Medvedev's team is offered a ministerial post in the new government," Igor Bunin said. "Yes, they are disappointed now, for they anticipated super-liberal modernization. But what could Medvedev do in four years? Who could support him in the struggle for the goals he proclaimed at the Yaroslavl forum in 2009, such as party competition and the like, apart from Dvorkovich and a couple of others?"

And lastly, the Western leaders who did not think they would see Vladimir Putin at the negotiating table again might also be disappointed.

"If U.S. Vice President Joe Biden really wanted to prevent the re-election of Vladimir Putin, as he clearly indicated last winter when he said he does not want to see him in the Kremlin, his words had the opposite effect," Anatoly Adamishin, former Russian Ambassador to Britain, said. "Putin's return will not please many Western politicians, but they are ready to work with any Russian leader. The West's attitude to Russia has become even more pragmatic over the past few years."