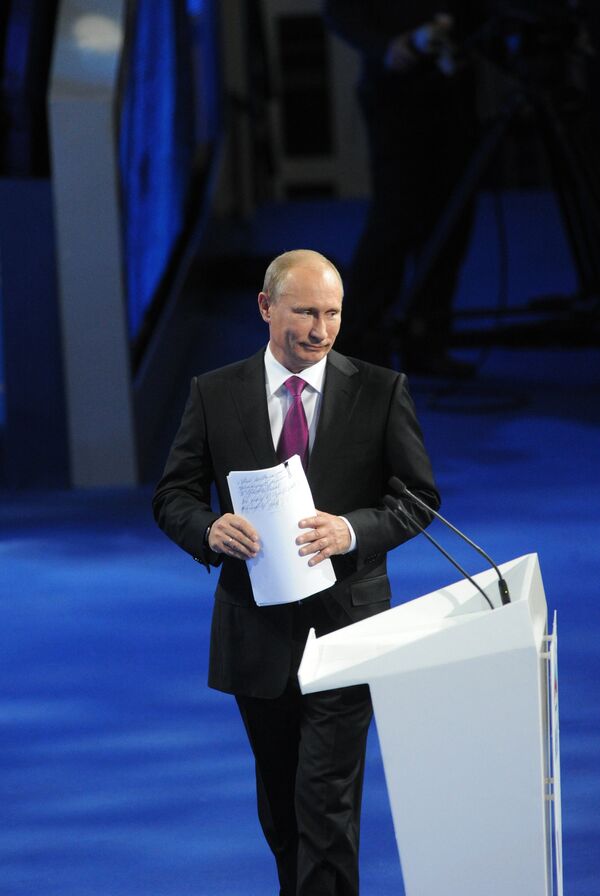 Few doubted that Prime Minister Vladimir Putin would remain Russia's top power-broker in the years to come in any formal capacity he fancied, but making clear the future power configuration on Saturday three months before the official presidential campaign kicks off in December betrays little of his trademark secretive style.

Few doubted that Prime Minister Vladimir Putin would remain Russia's top power-broker in the years to come in any formal capacity he fancied, but making clear the future power configuration on Saturday three months before the official presidential campaign kicks off in December betrays little of his trademark secretive style.

Accepting the presidential nomination offered by the younger partner in the ruling tandem, President Dmitry Medvedev, and offering him in return the post of prime minister in the future government and the top place in the United Russia party ticket for the State Duma elections in December, Putin eliminates the risk of the schism in the Russian ruling elite and gives a boost to his own party campaign, Russian political pundits agreed.

"This move minimizes increasing speculation about the split in the tandem ahead of the elections and gives Medvedev's appointees in the government motivation to continue their work without jitters over their future," said Yevgeny Minchenko, head of the Minchenko Consulting think tank.

With Putin undoubtedly set to become the next Russian president, United Russia's campaign gets a new boost, added Sergey Markov, a political analyst and a United Russia's lawmaker.

"Putin's future presidency is a new resource for the party. A vote for United Russia becomes a vote for the president's party," he said.

According to a September study by the All-Russia Public Opinion Study pollster, United Russia's representation in the future Duma will drop from the current 315 seats to 277 out of the total 450. Over 301 seats make a constitutional majority in the lower chamber.

The pre-election United Russia's congress where Putin's and Medvedev's plans were unveiled on Saturday also end speculation about Medvedev's future, which he himself had hinted would continue in academia, while many political observers had speculated he would take the chair as top judge in the Constitutional Court.

"Medvedev no longer faces the prospect of becoming a lame duck," said Alexei Mukhin of the Center of Political Information, a Moscow think tank.

Now, his rating and political future are tied to United Russia's and Putin's, he added.

Like Putin, who formally heads United Russia, Medvedev is not a member of the ruling party. In the past, he has even rebuked it for its monopoly of the political system and for alleged vote fraud in regional elections. In the meantime, he has attended major party conventions, a privilege no other Russian political party enjoyed.

Medvedev will continue wielding serious political clout in the post of prime minister as he will nominate ministers to the president, said Aleksei Makarkin, an analyst with the Center of Political Technologies think tank.

Another consideration that might have moved Putin to reverse the tandem is a looming economic crisis which may well hit Russia hard, Makarkin said. It is prime minister's job to deal with the national economy.

"It will be Medvedev, not Putin, who might take the heat for the possible economic troubles in future," the analyst said.

Although Putin said on Saturday that the agreement for such a swap had been secured with Medvedev several years ago, most analysts agreed that it looked more like a recent decision.

This month's failure by billionaire Mikhail Prokhorov to participate in the State Duma race with the Right Cause party, which he has briefly headed, makes Medvedev and the United Russia campaign easier, the pundits said. Prokhorov has openly blamed the deputy head of the presidential administration in charge of the domestic politics, Vladislav Surkov, for the unsuccessful course of his bid.