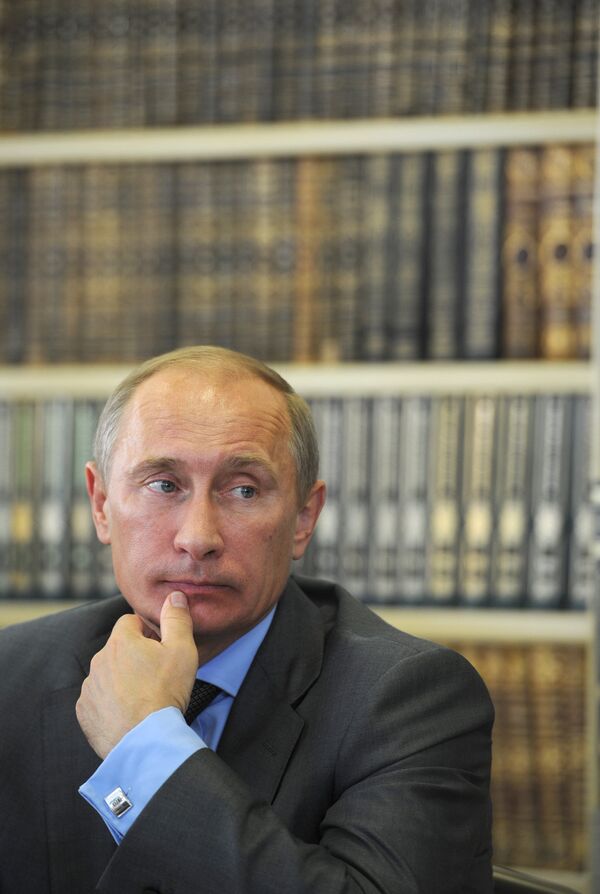 Vladimir Putin was born October 7, 1952 in Leningrad. He served as president of Russia from 2000 to 2008 and is currently prime minister of Russia.

Vladimir Putin was born October 7, 1952 in Leningrad. He served as president of Russia from 2000 to 2008 and is currently prime minister of Russia.

In 1975, Putin graduated from the law faculty of Leningrad State University, where he specialized in international law. In the mid 1970s, Putin joined the KGB and was appointed to the First Chief Directorate (PGU), an elite division in charge of intelligence abroad. Putin was posted to Germany and in the mid-1980s worked for over three years as deputy director of the House of Soviet Science and Technology in Leipzig.

At the beginning of the 1990s Putin started his career in the administration of St. Petersburg, serving first as an adviser before rising to vice mayor between 1992 and 1994 and first vice mayor from 1994 until 1996. During this time he worked under St. Petersburg mayor Anatoly Sobchak, who became his mentor.

In 1996 Putin entered federal politics when he was appointed deputy chief of the Presidential Budget and Management Office. The following year he became deputy head of the presidential administration and head of the Main Presidential Control Department.
In July 1998, Putin became director of the Federal Security Service (FSB). The following year he became secretary of the Russian Security Council before serving as prime minister between August 1999 and May 2000.

From December 31 1999 until May 2000, Putin was acting Russian president, taking over from Boris Yeltsin. He was elected president for the first time in 2000, receiving 53 percent of the vote and reelected four years later with 71 percent of the vote.

In May 2008 Putin became Russian prime minister. Many believe that he continues to be the dominant force in Russia politics, with President Dmitry Medvedev subordinate to him.

Putin was a member of the Communist Party of the Soviet Union until 1991. From 1991 until 2008 he was officially independent of any political party, although he enjoyed the support of various parties and movements. He became head of United Russia in 2008.

Putin enjoys high levels of popularity among the Russian public, with many crediting him with bringing economic and political stability to Russia. He is seen as a strong leader and ran the country during a period of high oil prices and capital inflow. He oversaw the recovery from the 1998 crisis and impressive GDP growth. The resulting dependence on commodities, does, however pose a real risk to the economic stability of the country today.

Despite his popularity, Putin has been strongly criticized by human rights’ groups for restricting freedom of expression in Russia and the decision to launch the Second Chechen War, during which there were reports of widespread human rights’ abuses. The rise of his close associates and the severe treatment of his opponents, such as Boris Berezovsky, Mikhail Khodorkovsky, have also led to criticism. In a statement released after his death, poisoned dissident Alexander Litvinenko directly accused Putin of orchestrating his assassination.

During his time as president, Putin established the Public Chamber of Russia, a committee which reviews draft legislation. He also changed the selection system for governors and presidents of Russia’s regions, introducing presidential nomination followed by approval or disapproval by regional legislatures.

Putin also agreed to the establishment of US bases in Central Asia ahead of the US-led invasion of Afghanistan in 2001 but opposed the US invasion of Iraq without approval from the United Nations Security Council. Putin opposes the expansion of US and NATO influence in the former Soviet Union, and condemned the US decision to place a missile shield in Poland and the Czech Republic.

Since becoming prime minister, Putin has attacked companies such as steel giant Mechel for selling Russian resources more cheaply abroad than at home. He heads the Russian government’s measures to combat the economic crisis and has responded quickly to civil unrest in the wake of worsening economic conditions. He intervened to order all wage arrears be paid to workers in Pikalyovo when the halt in production at three factories which constituted the town’s major employers caused major civil unrest in 2009.

On September 24, 2011, Russian President Dmitry Medvedev proposed Putin to run for president in March 2012, which gives Putin strong chances to extend his rule until 2024.

Despite declaring a relatively modest income, there have been suggestions that Putin is the richest man in Russia.

Putin practices martial arts and enjoys jogging. He has famously been pictured fishing bare-chested and hunting exotic animals, actively cultivating a strong man image.  He is married and has two daughters, Yekaterina and Maria.

Putin is a Russian Orthodox Christian. Baptized secretly by his mother, since the collapse of the Soviet Union he has been open about his faith.