The myths that Yanukovych will have to give up 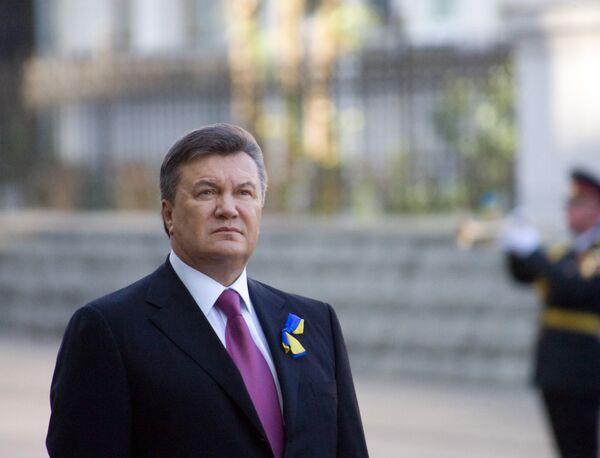 © RIA Novosti . Mikhail Markiv
/
Go to the photo bank
Subscribe
On Saturday, September 24 President Dmitry Medvedev and Prime Minister Vladimir Putin will meet with President of Ukraine Viktor Yanukovych in Moscow to discuss a number of pressing issues, above all, Russian gas supplies and Ukraine’s membership in the Customs Union that unites Russia, Kazakhstan and Belarus.

On Saturday, September 24 President Dmitry Medvedev and Prime Minister Vladimir Putin will meet with President of Ukraine Viktor Yanukovych in Moscow to discuss a number of pressing issues, above all, Russian gas supplies and Ukraine’s membership in the Customs Union that unites Russia, Kazakhstan and Belarus.

Russian-Ukrainian gas relations have reached a boiling point. Throughout the entire summer, Ukraine has been openly blackmailing Moscow in all directions. Kiev threatened to sever the gas transit contract of January 19, 2009 in the hope that a potential disruption of the transit of gas to the European Union (EU) would compel Russia to provide Ukraine with the discount that they have long been waiting for.

Ukraine's primary thesis is as follows: “We are being cheated into paying a much higher price for gas than even Europe.” In an interview with the newspaper Kommersant, Yanukovych bluntly said: “If you look at real prices, we pay around $200 more than Germany.” But this is simply untrue. In the third quarter of this year, Germany pays about $405 for Russian gas, while Ukraine pays $355. Where is the extra $200 he is talking about?

Now let’s return to the much-discussed contract of January 19, 2009. It has given rise to several myths. The main one has to do with “the base price.” Many Ukrainians are sure that Russia has tweaked the formula and taken the basic price “off the mark.” However, the price is well substantiated. In the fourth quarter of 2008 gas was very expensive in Europe. In Slovakia it cost $470 minus a $20 Ukrainian transit fee. Hence, a base price of $450.

Today Russia determines its gas prices, which it bases on the price of mazut (fuel oil) and diesel fuel in Italy during the previous nine months. Ukraine does not agree with this approach and believes the price should be calculated based on gas rather than oil products, and in Germany rather than Italy. Paradoxically, if we adopt this approach and take the price of Russian gas in Germany, minus its transit cost from the Russian-Ukrainian border to the Czech-German border, the result is the same $355 that Ukraine pays Russia today.

The myth about coal, shale and LNG

The second popular thesis is, “We don’t need this Russian gas at all!” This argument was most vividly expressed in a speech by Ukrainian Fuel and Energy Minister Yury Boiko on September 7, when he said that starting in 2015, Ukraine intends to reduce gas imports from the current 40 billion cubic meters a year to 12.5 billion, 5 billion cubic meters of which it will purchase from Azerbaijan.

The plan for a super fast reduction in energy consumption is unrealistic. This would only be possible if Ukrainian industry were to come to a full stop, which, fortunately, did not happen, even during the crisis in 2009.

Switching over to coal production (which is technically feasible) would also require time and money. It would be difficult to explain placing an emphasis on such dirty fuel as coal to the eco-sensitive EU. Earlier, Ukraine was planning to build four nuclear power plants, but the “nuclear renaissance” in Europe is over.

Now let’s consider gas supplies from other countries. There is a lot of talk in Ukraine about the opportunity to receive gas by way of a sea route, because gas from Turkmenistan needs to travel through Russian territory.

In September Ukraine even asked the Spanish company Socoin to conduct a study determining the feasibility of a prospective terminal to receive LNG on the Black Sea coast. In the estimation of the Ukrainian government, the construction of a terminal with a capacity of 10 billion cubic meters of LNG per year would cost $2.5 billion. Kiev doesn’t have the money for this, but this isn't even the main problem. The question is, where will Ukraine get LNG from? Azerbaijan has supply contracts for all of its gas. More gas can be produced only after the second stage of the Shakh Deniz deposit goes into operation in 2017. Thee European tubes – Nabucco, TAP and ITGI – will be standing in line for this gas. The South Corridor European project will collapse without Azerbaijani gas. Europe needs all of Baku’s gas and Kiev is completely out of place there.

Myths about Tymoshenko and the future of Naftogas

Yet another element of blackmail is the attempt to declare the 2009 contract invalid.  Kiev has chosen two roads. The first is the trial of former Prime Minister Yulia Tymoshenko that started in late June. Yanukovych hoped that Europe would keep silent and that Russia would yield out of fear of a new gas war. But Russia has maintained its position, and rather than remaining silent, Europe has made a public statement on the trial of Tymoshenko. Pinto Tesheira, a European Commission representative in Kiev, stated bluntly that the EU will not recognize the results of the 2012 parliamentary elections in Ukraine if Tymoshenko does not take part in them.

The second road lies through the restructuring of Nafrogas. More precisely, at first Kiev announced restructuring but then decided to replace this with liquidation. It's clear that splitting the company into several parts is pointless, but the main goal here is not to make it more effective but to rid itself of its commitments to Gazprom. To my knowledge, Brussels has sent Kiev a signal that withdrawing from the contract would be viewed as complete disregard of international law.

All these Kievan myths amount to empty talk, whereas reduction in transit via Ukraine is a harsh reality. The first leg of Nord Stream is ready, as is the OPAL gas pipeline that connects it with end users in Europe. This will allow Russia to redirect part of its gas, which will result in a reduction of about 20 billion cubic meters per year. Given the current transit rates, Ukraine’s direct losses will amount to no less than $700 million.
Kiev has absolutely no need for a third gas war. Apparently realizing this, Ukrainian Prime Minister Mykola Azarov mentioned the other day the need for compromise. Could he be implying a return to the idea of a trilateral consortium with the participation of European companies, say the German E.On? Gazprom has a controlling interest in gas transportation companies of all three Baltic countries and they are doing just fine.
Above all, the Ukrainian government needs to state in public that it will give Russia access to control over its gas transportation network. This is Ukraine’s only chance to retain its status as a transit country.

*Konstantin Simonov is the general director of the National Energy Security Fund.