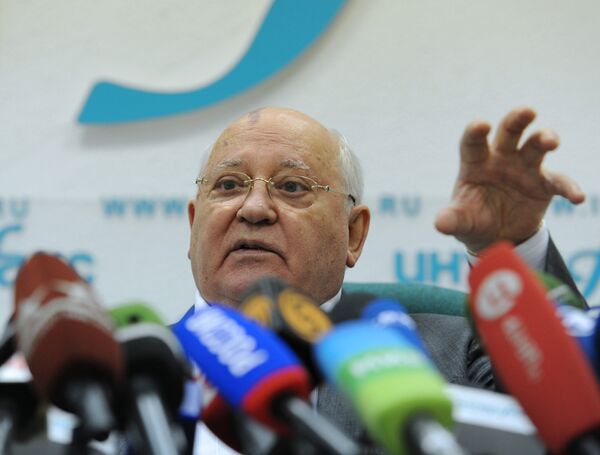 Russia needs to make urgent changes to its political system if it is to avoid instability, former Soviet leader Mikhail Gorbachev warned on Wednesday.

“For Russia, honest and free elections, as well as political competition, are as necessary as fresh air,” Gorbachev, 80, said in an article published by the popular Moskovsky Komsomolets newspaper.

He said that he had noted a “growing concern” among Russians over the “degradation of the state” and “demoralization of society.”

But, he said, "It is difficult to get away from the feeling that the Russian authorities have neither the political will nor the readiness to find a real way out.”

He also warned that if Russia did not make changes in the next “five or six years,” then there was a “great chance that the country will be unable to get out of this dead-end.”

Russia sees parlimentary polls in December and presidential elections in March. There has been speculation that Prime Minister Vladimir Putin may seek a third term in the Kremlin. But both Putin and his hand-picked successor President Dmitry Medvedev have ruled out running against each other.

Gorbachev also said that Russia was returning to a dangerous period of stagnation such as that experienced in the Leonid Brezhnev-era.

“It is the very absence of change which threatens to provoke instability and put the future of the country in question," he warned.

Although he did not mention Medvedev or Putin by name in his article, Gorbachev said in August that Russia’s powerful premier had “castrated democracy” in the country.

He also suggested last month that Putin was obstructing Medvedev’s attempts to implement a modernization program.

"The modernization plan put forward by the president in the economy, politics and other spheres is good but the president's possibilities are limited," Gorbachev said. "He's being outplayed and outsmarted by Putin, I see.”