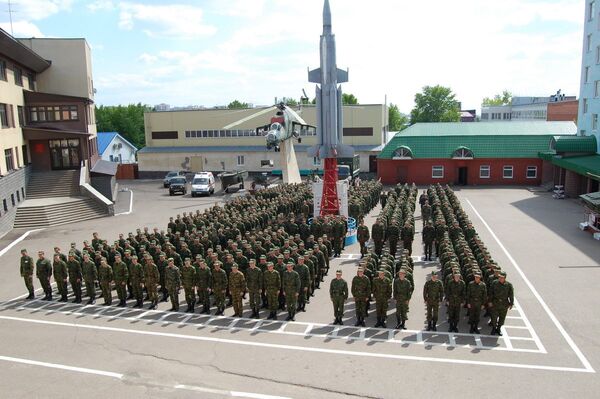 Center-2011 exercises kicked off Monday in Russia and Central Asia. Center-2011 is a contingency plan for Russia and its Collective Security Treaty Organization (CSTO) counterparts to practice the use of armed force "to stabilize the situation" in Central Asia. This outspoken position taken by some officials indicates that the drills will practice armed support for Russia-friendly regimes.

This year's largest strategic military exercise called Center-2011 will be held in Russia and in Central Asian states from September 19 through 26. Russian President Dmitry Medvedev will command the maneuvers.

Russia's Chief of the General Staff Nikolai Makarov said no large army units will be involved. "Brigades at most, not armies" will be set in motion. Nevertheless, about 12,000 troops and some 1,000 pieces of combat equipment, including 70 aircraft, will take part in the exercise. The Caspian Military Flotilla will also be involved at almost full strength.

The purpose of the joint drills is stated rather bluntly: training and using mixed forces to stabilize a situation and conduct military operations in a Central Asian strategic sector. So the areas set aside for combat training are all mostly in Central Asia and southern Russia.

In Tajikistan, operations will be limited to command and staff exercises by the Collective Rapid Reaction Force (KSOR) at Russian military base No. 201. In Kyrgyzstan, Kazakh, Kyrgyz and Tajik troops, supported by Russian aircraft from Kant Air Base, will conduct full-scale tactical drills. Over a thousand Russian troops and two hundred pieces of combat equipment are heading for the Oimasha proving grounds in Kazakhstan.

Updated Russian combat manuals and corresponding changes in army control chain will be a new feature of the drills. Lower level commanders will be given a greater degree of freedom in decision-making.

"Previously, senior commanders would describe every step to be taken by their subordinates two levels down. A battalion commander would issue instructions not only to the company, but also to platoon commanders. Now nobody will impede anyone's initiative, and officers will have to think through their tactical moves themselves," Makarov said, commenting on the new manuals.

Top officials - both in Russia and outside - have already expressed concerns over the possible echoes of the Arab Spring in the CIS (Commonwealth of Independent States). Last month, for example, Belarusian President Alexander Lukashenko spoke openly that the Rapid Reaction Force could be used not only against an external aggression, but also against the threat of a "constitutional coup."

Sergei Prikhodko, Russian presidential aide, supported Lukashenko's stand. CSTO Secretary Nikolai Bordyuzha noted soon after the Belarusian leader's fairly loud statement: "The events in North Africa have opened our eyes to many things. What is happening there calls for analysis, and for appropriate methods to protect each state."

Later, Bordyuzha explained that his words, as well as Lukashenko's wish, did not mean using the KSOR for interference in the domestic political affairs of the organization's member-states. "We are categorically against the CSTO taking up policing functions or participating in a political struggle on the side of any political force," Bordyuzha said.

It should be noted, however, that a number of amendments made to CSTO documents in December 2010 that are aimed at "improving the response mechanism to crisis situations and strengthening the CSTO's potential to counter threats and challenges to security" make use of the KSOR in such cases unlikely, but - given a broader interpretation - possible. The former approach specifically ruled out any legitimate interference by the organization's armed forces in the internal affairs of CSTO member-countries.

Literally last week Chief of General Staff Nikolai Makarov also spoke in the same vein. "The processes taking place in North Africa and the Middle East were difficult to forecast. What will happen next? What leadership will come to power? This has to be a warning to all states. We have similar questions for the Central Asian countries. We must be prepared for anything. This is why we are practicing with these drills," Makarov said, commenting on the objectives of Center-2011. He added that "Russia's military organization must be ready for a worst-case scenario."

These similarities in statement and allusion made openly by high-ranking officials can mean only one thing: the CSTO has acknowledged that the KSOR (read Russian armed forces, which make up the bulk of the CSTO united army), can be used to support the stability of political regimes in the organization's member-states. "By other means, means of extreme violence," as Clausewitz said in his day, describing the relationship between war and politics.