Cameron’s visit to Moscow: Views from Russia and Britain 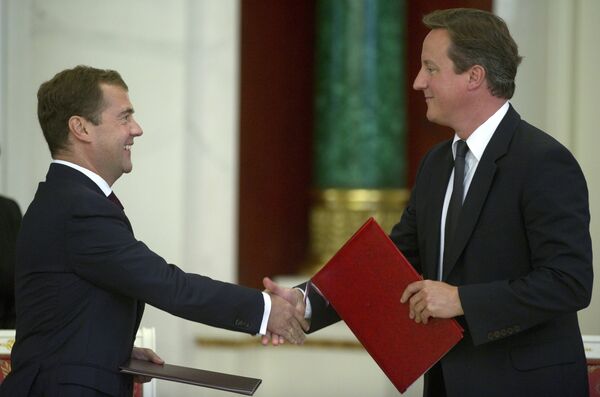 © RIA Novosti . Sergey Guneev
/
Go to the mediabank
Subscribe
International
India
Africa
The first Russian visit by a British prime minister in the last six years has begun a thaw in bilateral relations. President Dmitry Medvedev said after his meeting with David Cameron that there is no need to over-dramatize differences between the two countries on a number of issues. RIA Novosti has asked a British and a Russian analyst to share their views on David Cameron’s recent visit.

The first Russian visit by a British prime minister in the last six years has begun a thaw in bilateral relations. President Dmitry Medvedev said after his meeting with David Cameron that there is no need to over-dramatize differences between the two countries on a number of issues. The sides avoided mentioning the Litvinenko affair, focusing instead on economic cooperation.

RIA Novosti has asked a British and a Russian analyst to share their views on David Cameron’s recent visit. Alex Pravda is the head of the Russian and Eurasian Studies Center at Oxford University, U.K., and Alexei Gromyko is the director of the Center for British Studies at the Moscow-based Institute of Europe.

- The Western media wrote shortly before David Cameron’s trip to Moscow that meeting with Prime Minister Vladimir Putin would be more important than with President Medvedev. Since Alexander Litvinenko's murder British officials haven’t had any contacts with Putin. Why do you think Cameron decided to meet him now? Is it the right time, or other reasons?

Alex Pravda: I think that a long time has gone by after the Litvinenko’s events. And both sides seem to be moving to a position where the events coming needs speech. Let’s agree to disagree and then move on politically and particularly in terms of business relations. As for seeing Putin, Cameron has met Medvedev on several occasions, so he’s had quite a lot of talks with him and Medvedev wasn’t involved directly in Litvinenko’s events at the time. Since his [Cameron’s] main interest is economics and business, Putin was the obvious interlocutor for that. And there was a lot of pressure on this side including the letter from four foreign secretaries in Sunday Times, asking him when he does see Putin to raise not only the issue of Litvinenko, Lugovoi and so on but also to talk a bit about Khodorkovsky and Magnitsky and other cases. Now that publically Cameron mentioned only Litvinenko, but in a minimum way, I think. But very straight forward and made it a principle issue and I think he was right to emphasize the very important position for both Russia and Britain have a good rule of law. So I think in terms of your question why did he talk to Putin rather than just to Medvedev it would have been illogical to go all the way to Moscow but not talk to Putin, who is clearly perceived everywhere in the world as still the senior partner regardless of the status of two offices and particularly the business interest as well.

Alexei Gromyko: Nothing about how the meetings were held or the substance of the talks suggest that meeting with Putin was more important to the British PM than his meeting with Medvedev. Second, all global leaders have met with the Russian prime minister in the last few years, and his contacts with the British leaders were limited, not severed. But there would not have been any contacts with the Russian president either if not for G8, G20 and UN meetings. So the focus should not be on the British side’s intentions not to meet with a Russian leader. As for the substance of these meetings, they were held to restore relations between our countries.  British prime ministers have not visited Russia since 2005, and so this visit was bound to take place sooner or later. It could not be postponed any longer: a new government has come to power in Britain and they probably decided that the  relationship with Russia that they inherited from the Labor government is wrong. Britain is interested in furthering economic relations with Russia. It’s good that [Cameron] did not come to Russia later, closer to the State Duma elections or, the presidential elections, because a country  is always focused on internal political issues during campaign season. If he hadn’t come to Russia now, the visit would have been put off until next spring or even summer, which would not have worked as well for the British authorities.

- What does this visit mean for Russian-U.K. relations? Is it a kind of a reset?

Alexei Gromyko: No, this is not a reset. A reset implies a breakthrough or a package of measures and solutions. Cameron’s visit has not added any fundamentally new element to our relations but has normalized them. So a reset is, first, too big a word to describe the visit and, second, U.K.-Russian relations are not usually marked by breakthroughs or setbacks, but rather develop consistently. Unlike the reset with the United States, which was based on nuclear arms reduction agreements, Russia and Britain have been working slowly but steadily for over two years to restore their political relations. The process will continue for at least another year until our relations return to the level achieved in the mid-1990s.

- Both Cameron and Medvedev said that Litvinenko’s case shouldn’t influence relations between our two countries, but in time they again confirmed  their position about this case. How can the U.K. and Russia rebuild their relations without them dealing with that case? How can they put it aside?

Alex Pravda: I don’t think they put it aside… If you have a difference between the two states on the point of principle on law you both hold to your point. I mean after all Moscow held to no extradition [of Andrei Lugovoi] because it’s against the constitution. But it’s bound to that position, that it’s reaffirmed, that there’s no discussion. Only Lavrov said if there’s more evidence, he can be trialed in Moscow. That’s the position that Moscow holds to the moment. They both agreed that that’s still a case of differences between the two countries but that doesn’t mean to say you don’t move on in lots of other areas and hope if you do conform enough cooperation and practice on other issues that this may help to ease this particular issue of disagreement, to form some sort of community of practice, that’s what we are trying to do… But I don’t think one has to put aside these things in order to move forward.

Alexei Gromyko: First, our political differences are not all consuming. They are actually quite focused and limited. Our countries have been working closely in the past few years in international formats such as the UN Security Council, the G8, the G20 and the Middle East Quartet. There was only a freeze in bilateral relations in certain spheres. Second, there is no tragedy in countries having differences. There are other countries apart from Russia with which Britain has differences. In general, few countries have no problems or obstacles in relations with other countries. A recent example is the growing confrontation between Turkey and Israel. This is not unusual in international relations. Take relations between Russia and Japan: they are complicated by the Kuril problem, but this does not mean they are avoiding each other in the economic or political spheres. There will be problems in relations with Britain, which does not mean we should not cooperate on other political or economic issues that are much more important to our countries and the rest of the world than the issues over which we have and may have differences for a long time yet.

- What will be the effect of the British prime minister’s visit to Moscow on the course of bilateral relations?

Alexei Gromyko: This visit was designed to normalize our relations. There will be no visible change in the next six months because our economic relations are developing quite dynamically and we don’t need to force more progress. Britain will wait for the outcome of the Russian parliamentary and presidential elections. As for the next move, the British prime minister’s visit should eventually be followed by a visit of the Russian head of state to Britain.