Right Cause votes to remove Prokhorov as leader 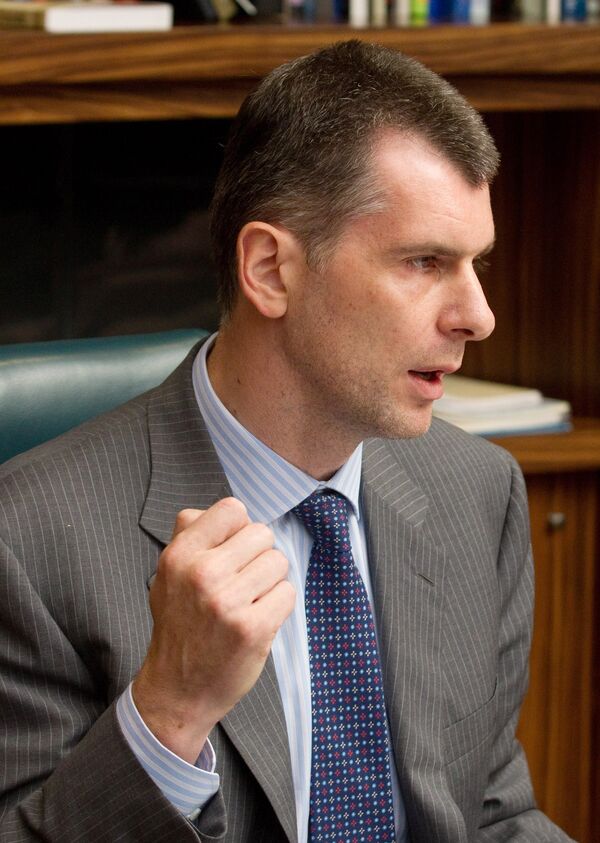 Opponents of Mikhail Prokhorov, leader of the split Right Cause party, voted on Thursday to oust him as the party leader following a disputed party congress.

Opponents of Mikhail Prokhorov, leader of the split Right Cause party, voted on Thursday to oust him as the party leader following a disputed party congress.

The split in the party reached its peak on Thursday when two Right Cause parties - Prokhorov's opponents and supporters - are meeting in different buildings in Moscow for their congresses in the run-up to the parliamentary elections in December.

The scandal erupted after Prokhorov and his supporters accused some party members of illegally registering new members in his absence on Wednesday to win a majority and vote against his leadership.

Billionaire Prokhorov on Thursday called on his supporters to quit the party, which he called "the Kremlin's puppet project," and to set up a new one.

"The party congress [on Wednesday] was falsified but going to court is formally difficult because we do not have documentary evidence," Prokhorov said.

Former co-chairman of the party, Georgy Bovt, said the current meeting of Prokhorov's supporters in the Russian Academy of Sciences was illegal and explained his decision to abstain from joining Prokhorov.

Prokhorov said his loyalists had already prepared applications for leaving the party.

Prokhorov, whose proposals on the modernization of Russia have been publically supported by President Dmitry Medvedev, said he would discuss forming a new movement and then party with the authorities, which, he added, have opted for non-interference.

Leonid Gozman, former co-chairman of the Right Cause, said the party stood slim chances of joining the parliament, and added that therefore he had no intention of joining Prokhorov's new party.

"I think in our political system and in these particular elections this goal is unattainable," he said. "And I don't want to join a project that is clearly going to be a loser from the beginning."

A celebrated Russian pop diva, Alla Pugachyova, also arrived at the congress of the Right Cause on Thursday. She declined to answer any questions. On Wednesday, the party press service said Pugachyova would join the party.

During the party meeting on Thursday, Prokhorov will present an extended "shadow government" lineup, which will include top businessmen, researchers, politicians and public figures, the party's press service said.

The 46-year-old billionaire, ranked by Forbes as Russia's third richest man with a fortune of $18 billion, formally quit business in June to head the Right Cause party. He made no secret of his presidential ambitions if the party did well in the parliamentary polls.