Prokhorov says not quitting as Right Cause leader 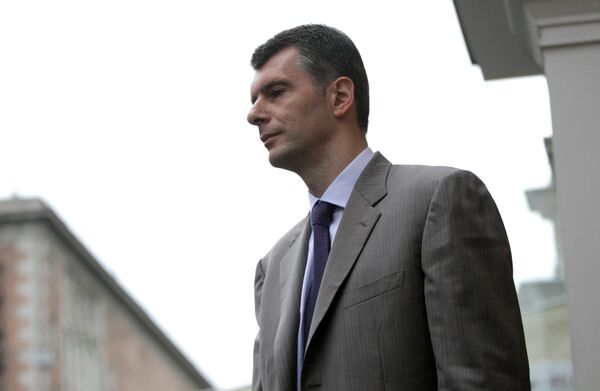 © RIA Novosti . Valery Melnikov
/
Go to the photo bank
Subscribe
Russian billionaire Mikhail Prokhorov said on Wednesday he would not quit as the leader of the Right Cause party despite speculation.

Russian billionaire Mikhail Prokhorov said on Wednesday he would not quit as the leader of the Right Cause party despite speculation.

Prokhorov's spokesman accused other party members earlier in the day of registering irrelevant people for mandates to vote against Prokhorov's leadership on Thursday. Congress participants dismissed the allegations.

In an interview with the Ekho Moskvy radio station, Prokhorov also denied media reports that he would announce his resignation from the post at a briefing scheduled for 5:00 p.m. Moscow time.

Prokhorov failed to attend the first day of the party's three-day congress ahead of the December parliamentary elections. His absence surprised party members who elected the mandate and accounting commissions without him.

Prior to the congress, media circulated reports that the party might consider ousting Prokhorov who assumed leadership in the party in June.

A source inside the party said some influential people wanted the billionaire to be replaced. Andrei Dunayev, head of the party's executive committee, said that no such discussion was on the agenda of the congress.

Under the party regulations, such issues are decided by the party congress.

Prokhorov, 46, ranked by Forbes as Russia's third richest man with a fortune of $18 billion, formally quit business in June to head the Right Cause party. He has said he will stand for president next spring if the party does well in December's parliamentary polls. His proposals on the modernization of Russia have been publically supported by President Dmitry Medvedev.