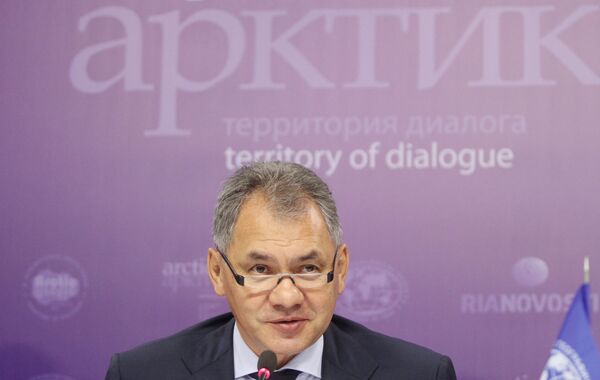 Russia will gradually expand its presence in the region as retreating Arctic ice extends the period when the Northern Sea Route remains ice-free, he said.

"There [in the Arctic] we will need navigation safety projects and bases to deal with all kinds of tasks: from fuelling and navigation to communication systems and rescue. We must also set up centers to deal with - God forbid - oil spills," Shoigu said at a news conference ahead of an international forum to discuss problems of the Arctic.

The second international forum, The Arctic: Territory of Dialogue, will be held in the northern Russian city of Arkhangelsk on September 22-24. This year, the forum will focus on transport issues, key to the development of the Arctic region.

The forum in Arkhangelsk will be attended by about 400 major scientists and experts, as well as politicians and leading businessmen.

The Russian emergencies minister said the next year's forum should focus on environmental safety of hydrocarbon extraction and transportation in the Arctic.

"In our opinion, safety issues during hydrocarbon extraction and transportation deserve to be the main topic of a separate forum. We will propose it for the next year, as we are convinced that this problem becomes a real threat when ignored," said Shoigu, who also heads the Russian Geographical Society, the forum's organizer.

The issue of pollution in the Arctic was recently raised by the Russian premier, who in late June called for a "big cleanup" in the Arctic Region to remove oil barrels and other refuse scattered around polar stations.