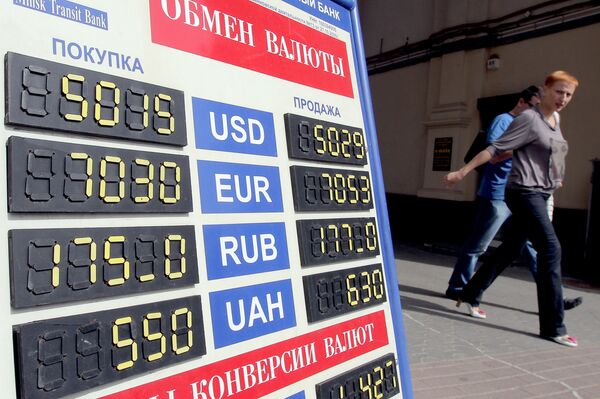 Crisis-hit Belarus may abandon plans to raise an $8-billion loan from the International Monetary Fund and will put a $1-billion credit from Russian bank Sberbank to a local company into state reserves, central bank Deputy Chairman Taras Nadolny said on Wednesday.

Minsk asked the IMF for help in June after it had to devalue its ruble pressurized by a large trade deficit, generous wage increases and loans granted by the government ahead last December's presidential election. But the IMF said the government had failed to present a sound economic program and promised to send a new mission to Minsk in October.

"I am not ruling out that we will cope with the economic situation on our own," Nadolny said, adding that the final decision was yet to be made.

Nadolny also said that the $1 billion provided by Sberbank to Belarus' largest potash-maker Belaruskali would be allocated to the country's foreign exchange reserves.

"When the money comes to us, it will certainly be allocated to gold and foreign exchange reserves," Nadolny said.

Sberbank and Deutsche Bank have offered Belarus' government, which is planning privatization of Belaruskali, a $2-billion loan collateralized against 35 percent of the company's shares, but Belarus wanted to collateralize the credit against Belaruskali's export contracts. Belarus later agreed the uncollateralized loan with Sberbank.

"Currently, the situation with gold and foreign exchange reserves is good, we have money to support the (exchange) rate," Nadolny said after allowing the ruble to float in an additional trading session on Wednesday, when the ruble slumped 60 percent against the dollar compared to the official rate.