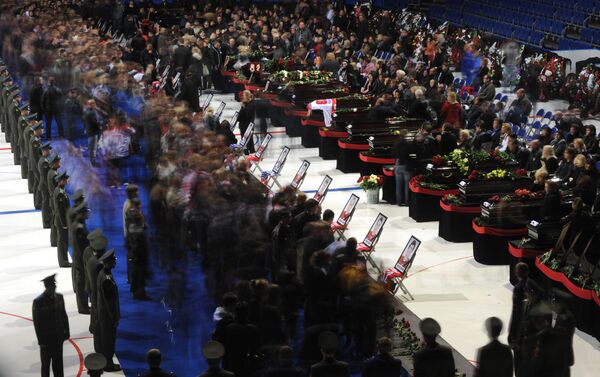 The Lokomotiv Yaroslavl ice hockey team has announced it will miss this year's season after the plane crash which killed almost its entire squad.

The Lokomotiv Yaroslavl ice hockey team has announced it will miss this year's season after the plane crash which killed almost its entire squad.

Lokomotiv's chartered jet crashed on take-off near the Volga city of Yaroslavl on Wednesday as the team were heading to the Belarusian capital Minsk for the season's first match against Dinamo Minsk.

Thirty-six players and officials died in the crash, along with seven crew.

Russian player Alexander Galimov survived the crash with 90 percent burns along with a member of the crew. Both remain in grave condition.

Speaking at a memorial ceremony at Lokomotiv's home Arena-2000 stadium on Saturday, Lokomotiv president Yury Yakovlev announced the team would miss the 2011/2012 Kontinental Hockey League (KHL), saying it was the club's "firm position."

"We should rebuild the team, there's no doubt about that," Yakovlev said. "But to that end, we need time and people."

On Thursday, KHL president Alexander Medvedev suggested other clubs in the league volunteer up to three players each toward rebuilding the Lokomotiv squad.

The first round of fixtures was postponed until Monday as Russia tries to deal with the tragedy.

A memorial service was also held in Minsk.

Lokomotiv Yaroslavl, founded in 1949 as the team of the Railways Ministry, is one of Russia's leading hockey teams and came runner up in the nascent KHL in 2008 and 2009. In 1997 it took the Russian Superleague title and won back-to-back championships in 2002 and 2003.