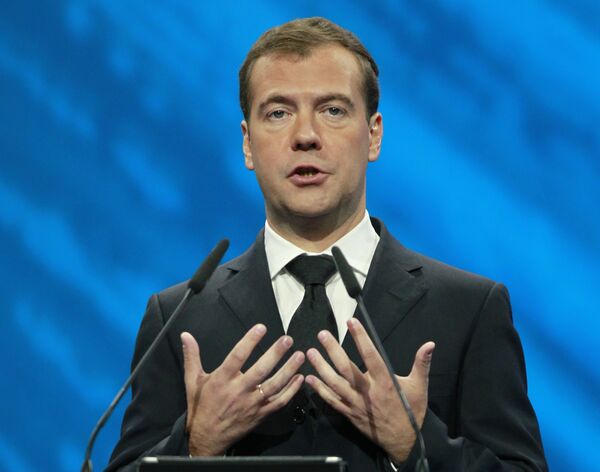 President Dmitry Medvedev's speech at the Global Policy Forum in Yaroslavl has confirmed the long-standing public image of him as a socially responsible right-of-center politician who believes in the gradual progress of reforms.

President Dmitry Medvedev's speech at the Global Policy Forum in Yaroslavl has confirmed the long-standing public image of him as a socially responsible right-of-center politician who believes in the gradual progress of reforms.

Medvedev said that election legislation should become more democratic, that officials need to listen patiently to everyone's complaints, even the smallest groups of people, and that the 15-fold discrepancy in earnings between the richest and the poorest 10% of the population in Russia must be reduced. Medvedev also denounced "the extremist class struggle doctrine" and said we must carry on "the war against separatism and terrorism" - statements that would do honor to any rightwing politician in any European country.

But the Russian political caucus was disappointed that the president did not announce whether he would run for re-election in March 2012. Officials and political analysts need to know this in order to decide which of the potential candidates to offer their support and their services. But is this at all important to the average citizen who receives no political dividends from this, one way or the other?

If we compare Medvedev's speech in Yaroslavl to Vladimir Putin's speeches as president and prime minister on similar occasions, it's clear that there is no difference in their priorities. There are, however, differences in the nuances of their style, and in their favorite words. For example, when Medvedev talks about state development, he likes to use words such as "smart," and "complicated," while Putin favors the terms "vertical" and "controllable."

There is a difference between these words, but no contradiction. Can't a complicated mechanism also be controllable? And can't a "smart" official make a career in a vertically structured system of power? However, such an official would hardly have the time or desire to fulfill one of the incumbent president's instructions to communicate with all social groups, even the smallest ones, as this implies "horizontal" communication, while officials functioning in a vertical system of power only have time for capturing impulses from above.

There is also no major difference between the social priorities that the two leaders proclaim. In 2007, when Putin met with members of the Valdai Discussion Club for the last time as president, he said that his greatest achievement had been the reduction in the number of the 30 million poor people in Russia. Medvedev brought up this same issue in his speech in Yaroslavl, noting that the proportion of Russians whose income is below the subsistence level has fallen from 29% in 2000 to 12% in 2010.

He added, self-critically, that growing food prices early this year increased the number of the poor by 3%.

These figures indicate that wage increases have not helped the most vulnerable strata of the population ("poverty pockets") in Russia, for whom wages need to be increased at least by several thousand rubles, not a mere 500 rubles, in order to reach the subsistence level. Furthermore, the poorest Russians are not people with disabilities or old-age pensioners, but rather workers in publically-funded industries, including mothers with children. These statistics could be improved easily if incomes were raised for those who are only 100 rubles below the subsistence wage, but it is much more difficult to help poorer groups of the population.

All of these problems existed in Russia under Putin, and they continue to exist under Medvedev. Both leaders offer similar solutions, perhaps the only viable solutions for Russia: targeted social assistance and a growth in the number NGOs.

In Yaroslavl, Medvedev said that public organizations could even take over some of the functions of power from the authorities. This may seem like an alluring possibility, but the number of political parties has decreased, the terms of financing for NGOs have become more complicated in the past ten years, and there does not seem to be any readily available solution to these problems. Any reasonable person would agree that the development of democracy needs to proceed gradually and steadily. But when will we have a real alternative, a choice of political options analogous to that which, thankfully, we have long had as consumers?

To Medvedev's credit, he did not try to hush up any of Russia's problems in Yaroslavl, including ethnic issues. He said that the Russian population is declining in the North Caucasus and expressed concern over migration issues, obviously referring to increasing immigration from the former Soviet republics of Central Asia. He said that different ethnicities living in Russia together need to respect not only the law but each others' customs and traditions as well.

What we need now is to find solutions to these problems - and discussions at the forum may help.