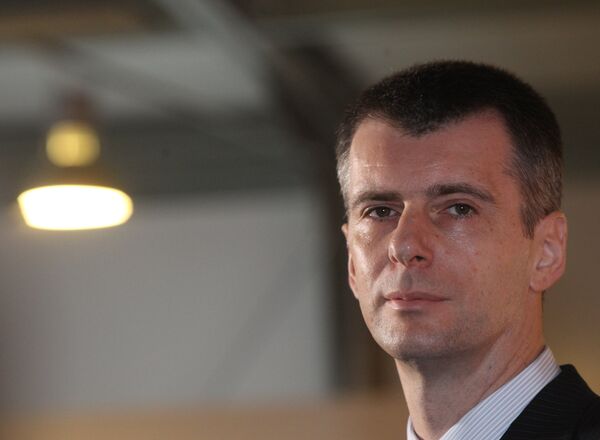 Former Yukos CEO Khodorkovsky and his business partner Platon Lebedev were jailed in 2005 for money laundering. In December, they were sentenced to another six years on additional charges.

Khodorkovsky says the charges against him were politically motivated and revenge for his backing of Russia's opposition under then president Vladimir Putin. The Kremlin has strenuously denied the allegations. Putin said ahead of the second trial that "a thief belongs in jail."

Prokhorov, ranked by Forbes as Russia's third richest man with a fortune of $18 billion, formally quit business in July to head the Right Cause party. He has said he will stand for president next spring if the party does well in December's parliamentary polls. His proposals on the modernization of Russia have been publically supported by President Dmitry Medvedev.

"I publically quit business and headed a political party. I did this according to Russian law," Prokhorov told Gazeta.ru. "I have not done anything that is forbidden."

"If Khodorkovsky had acted in the same way, the outcome would have been different. It's no possible to engage in politics while you are the head of a large company," he said.

But Prokhorov also criticized the decision to try Khodorkovsky and Lebedev a second time, saying that there had been "procedural violations" and "doubts" about its fairness.

He also supported the two men's so far unsuccessful appeals for early release for good behavior, saying he did not see "one good reason" why the two men should not be freed.