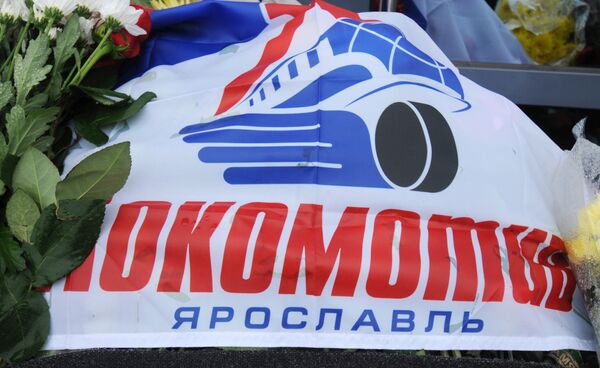 Lokomotiv Yaroslavl will take part in this year's Kontinental Hockey League championship despite the entire team and coaching staff being killed in a plane crash, a source close to the club told RIA Novosti on Thursday.

Lokomotiv Yaroslavl will take part in this year's Kontinental Hockey League championship despite the entire team and coaching staff being killed in a plane crash, a source close to the club told RIA Novosti on Thursday.

Lokomotiv's chartered Yak-42 crashed just after takeoff on Wednesday as the team were heading to Minsk for their season opener against Dinamo Minsk. Forty-three people were killed including a slew of former NHL stars and future draft prospects. There were two survivors, Russian player Alexander Galimov and one of the eight crew members on board. Both are in critical condition. Galimov has burns to 90 percent of his body, a hospital official said.

It was decided Thursday at a meeting between the Yaroslavl region governor Sergei Bakhrukov and a KHL delegation that Lokomotiv should take part in this year's championship, which was supposed to start on the day of the crash, the source said.

So far at least 30 players from other clubs have volunteered to represent Lokomotiv, the source said, most being former Lokomotiv players or Yaroslavl natives.

Players from Lokomotiv's youth team can make up any shortfall, the source said.

Russian Sports Minister Vitaly Mutko, opening a sports forum in Saransk, confirmed that Lokomotiv will be saved and that there are several ways to make it happen. He did not elaborate.

Earlier, the KHL said the league is to start no earlier than Monday.

"We've made the decision to postpone the start of the KHL championship to Monday at least," vice president Vladimir Shalayev told RIA Novosti. A total of 19 matches were scheduled to take place before Monday.

A decision on the new dates will be made "in the next few hours," Shalayev said.

An official explanation for the crash is yet to be given, although an aviation industry source told RIA Novosti that poor quality fuel may have hampered the jet's ability to build up enough speed on the runway.

Lokomotiv Yaroslavl, founded in 1949 as the team of the Railways Ministry, is one of Russia's leading hockey teams and came runner up in the nascent Kontinental Hockey League in 2008 and 2009. In 1997 it took the Russian Superleague title and won back-to-back championships in 2002 and 2003. It was one of the favorites for this year's Kontinental Hockey League.

The season-opening game between reigning champion Salavat Yulaev and Atlant in the city of Ufa was postponed as news of the disaster broke, and a further four matches scheduled for Thursday have also been pushed back.