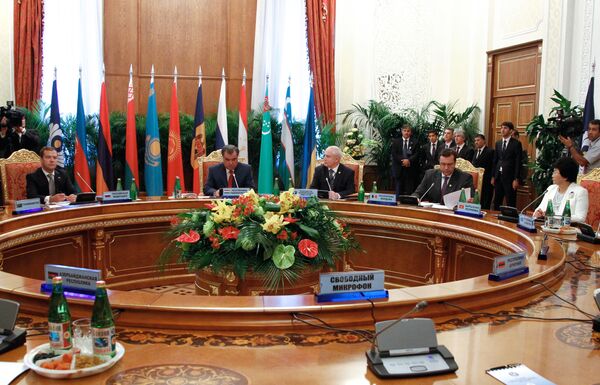 © RIA Novosti . Dmitry Astakhov
/
Go to the photo bank
Subscribe
Leaders of a post-Soviet alliance called on Saturday for signing a delayed free trade agreement and peacefully resolving conflicts in their final statement rounding up the summit.

Leaders of a post-Soviet alliance called on Saturday for signing a delayed free trade agreement and peacefully resolving conflicts in their final statement rounding up the summit.

Leaders of the CIS alliance, which includes Armenia, Azerbaijan, Tajikistan, Kyrgyzstan, Kazakhstan, Russia, Moldova, and Uzbekistan, gathered in Dushanbe, the Tajik capital. Ukraine was also represented at the event though officially it is not a member.

"Considering the sustainable growth in foreign trade, CIS member states are seeking to develop economic cooperation based on the CIS economic development strategy until 2020," the statement said.

The key goal at the moment is to form a free trade zone, the document said.

In May, the CIS Economic Council decided to work further on the draft agreement on free trade in the CIS. It was later discussed by the CIS premiers who failed to reach an agreement. The next meeting of CIS premiers will be held in October.

"I don't see any reasons for this agreement to be postponed," he said, adding that the document should be based on the World Trade Organization's principles.

Ukraine is seeking integration with Europe and plans to sign an agreement with the EU, which also includes a provision on a free trade zone. Russia has been inviting Ukraine into a Customs Union of Russia, Kazakhstan and Belarus. But Ukraine insists on a 3+1 format.

"The main precondition for successful CIS development is peaceful resolution to conflicts based on mutual trust and norms of international law," the statement said.

The CIS countries also agreed to continue cooperation in the fight against terrorism, extremism and drug trade. The summit participants also signed an agreement on duty officers actions in case of a reported plane hijack.
The countries also agreed to preserve the memory of the courage and heroism of former Soviet republics in the days of World War II.

The CIS leaders said in the statement that they would continue political consultations on key issues in global politics. They also hailed projects to strengthen regional and global security, including Russia's proposal on a European security treaty.

In November 2009, Russian President Dmitry Medvedev presented a draft proposal on a new European security agreement as an alternative to NATO. The document called the United States, the European Union and Russia the "three branches of European civilization," and assigned priority to the UN's role in international affairs.