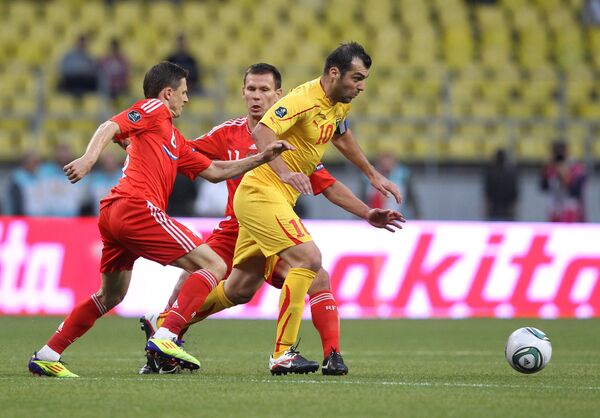 Igor Semshov's first-half strike gave Russia a 1-0 win over Macedonia on Friday, putting his side in a commanding position at the top of Euro 2012 qualifying Group B.

Igor Semshov's first-half strike gave Russia a 1-0 win over Macedonia on Friday, putting his side in a commanding position at the top of Euro 2012 qualifying Group B.

Semshov scored in the 40th minute, drilling a shot from the edge of the area under Macedonia goalkeeper Martin Bogatinov, who got a palm to the ball but couldn't keep it out.

The goal vindicates coach Dick Advocaat's choice to pick Semshov, who has been in goalscoring form for Dinamo Moscow, over Lokomotiv midfielder Denis Glushakov.

Macedonia had a strong penalty appeal turned down immediately before the goal with captain and Napoli striker Goran Pandev being felled in the box.

The win puts Russia top of Group B on 16 points from 7 games. Ireland and Slovakia, in joint second on 13 points, face off later on Friday in Dublin. The winner would join Russia at the top; a draw would leave Russia two points ahead with three matches remaining.

Russia were in control for most of the match, and the score might have been a lot higher if it weren't for several reflex saves from visiting goalkeeper Martin Bogatinov.

Pandev and midfielder Ivan Trickovski were Macedonia's most dangerous players, with both spurning several chances throughout.

Trickovski tried an early long shot that Russian keeper Vyacheslav Malafeev palmed to safety. Malafeev caught the ball in a repeat of the episode minutes later.

Trickovski scuffed a third shot wide after Konstantin Ziryanov's botched clearance fell straight to him at the edge of the area.

Kerzhakov fired wide for the hosts on 19 minutes in Russia's first attempt on goal.

Arshavin cut in from the left soon after but had a shot blocked, and Roman Shirokov skewed wide after a flowing move started in midfield by Ziryanov.

Pandev, loaned out to Napoli from Inter Milan late last month, span swiftly on the edge of the Russia area to play Mirko Ivanovski through on goal, but the striker's first-time shot sailed over.

Arshavin's reverse pass then played Zhirkov through down the left flank; the wingback skipped down the goalline and centered, but the pass was cut out.

As the hosts continued to press, Kerzhakov's flicked header bounced inches wide of the far post from an Arshavin free kick.

Five minutes before the break, Pandev skipped through after a flowing move from the visitors and was brought down, but the referee waved play on.

Russia scored from the counterattack, incensing the Macedonia players, who surrounded the referee.

Macedonia responded instantly, with Pandev placing a shot just over after Malafeev could only parry a long shot.

Kerzhakov missed a chance to double the lead at the start of the first half, firing straight at the goalkeeper from the inside left channel.

Malafeev parried a stinging long-range free kick from midfielder Velice Sumulikoski, who plays in Russia for FC Sibir of Novosibirsk.

Pavlyuchenko darted into the area from the left to blast a shot to Bogatinov's left, and the goalkeeper got a strong hand to the ball to palm it away.

Substitute Dmitry Torbinsky almost scored , heading Zhirkov's cross back across the goalkeeper, but Bogatinov reacted sharply to save. Zhirkov had outfoxed two Macedonian defenders with a simple but well-timed dragback to make room for the cross.

Torbinsky fired wide ten minutes from time after a neat through pass from Pavlyuchenko.

Macedonia, second-bottom in the group with little chance of qualifying, could have tied it late on but Vance Shikov volleyed over.

Pandev was shown a second yellow card for arguing with the referee after the final whistle.

"I'm very happy with the result. It was a difficult match, especially the first half," Russia coach Dick Advocaat said. "We had enough chances to have two or three goals," he said.
"It was a tough game. We expected a difficult match," Macedonia coach John Toshack said. "I thought we had a clear penalty." "Russia are a very strong side. They don't need the help of the referee."

Russia next face Ireland in Moscow on Tuesday.